My Stinky Summer by S. Bug (A Nature Diary #3) (Hardcover) 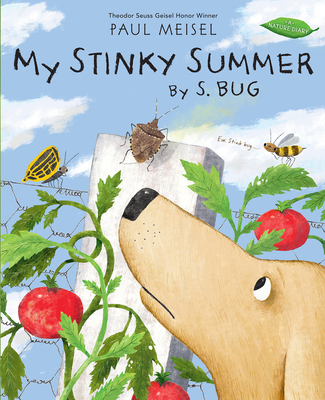 My Stinky Summer by S. Bug (A Nature Diary #3) (Hardcover)

This is book number 3 in the A Nature Diary series.

Hilarious and scientifically accurate, this Nature Diary gives readers a bug's-eye-view of the life cycle of a stinkbug.

Told in diary form, My Stinky Summer by S. Bug introduces readers to the stinkbug's life cycle and survival habits.

From the day he is born, S. Bug hears the same refrain--"Ew! Stinkbug!" The stinkbug's odor is powerful protection against from predators. Perhaps too powerful. Readers will also learn about the challenges that arise when an ecosystem is pushed off-balance.

Children will love poring over the bright, highly detailed illustrations and pondering ideas about ecosystems and nature.

The book includes a glossary and further information in the back of the book. Both art and text have been vetted for accuracy by an expert.

My Awesome Summer by P. Mantis
CCBC Best-of-the-Year List, AAAS /Subaru Finalist, Leaping Lizards Top 10 Read-alouds, SCIENCE Best Books for Curious Kids, Virginia Readers' Choices
My Happy Year by E. Bluebird
A Junior Library Guild Selection
Paul Meisel, who holds a master's degree in graphic design from Yale University, has illustrated many books for children, some of which he also wrote. See Me Run is a 2012 Theodor Seuss Geisel Award Honor Book and See Me Dig is a Kirkus Reviews Best Book.
★ "The book itself is composed of gorgeously detailed full-page watercolor illustrations and two-page spreads. . . . Informative for readers of all ages, the book is as charming as its perspective is unusual. A truly unique must-have for any collection."—School Library Journal, Starred Review

"Meisel’s inviting artwork illustrates the bug’s activities, such as molting, foraging, and defending itself against predators. . . . A worthy addition to the attractive Nature Diaries series."—Booklist

"Meisel manages droll, restrained anthropomorphism here that illuminates stink bug habits without making S. either a villain or a misunderstood hero; Bug is just a bug doing its bug things, without malice or virtue. . . . The diary entry format gives lots of breathers to new readers but also works well for a readaloud, especially for young naturalists or recent victims of stink bugs."—The Bulletin of the Center for Children’s Books

"The watercolor and acrylic illustrations are humorous yet real-world; painterly and refreshingly un-cartoonish. . . . The format and short sentences will suit independent early-chapter-book readers, but do read it aloud, if only for the luxury of saying “stink” as often as you want to." —The Horn Book

"Text is minimal in this fact-filled, captivating title. Sentences are concise and witty, capturing the voice of this feisty individualist. . . . Appealing colorful illustrations depict natural-world details, rendered in vivid colors. White space and light-colored backgrounds allow kids to focus on S. Bug’s activities and habitat. Illustrated facts about stink bugs appear on the endpapers, which are designed so that no text is covered by the flyleaves.  Here’s an enticing critter children won’t soon forget."—Kirkus Reviews


"Mixed-media art portrays the insect at different stages of maturity amid leafy spreads, and a cameo by another famous stinker—the skunk—draws laughs. . . . An effective addition to the series."—Publishers Weekly


"Students will be drawn in by the full-color illustrations and nicely spaced, easy-to-read text on each page. . . . This would be an excellent beginner's book for budding entomologists"—School Library Connection