My Happy Year by E.Bluebird (A Nature Diary #2) (Hardcover) 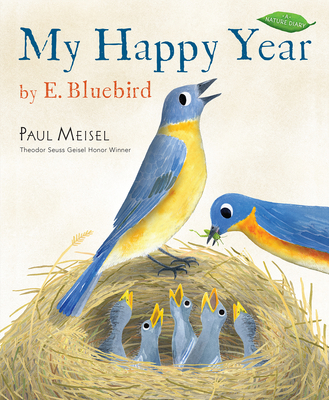 My Happy Year by E.Bluebird (A Nature Diary #2) (Hardcover)

This is book number 2 in the A Nature Diary series.

With humor and charm, a bluebird narrates her first year of life--adventures, joys, and scary times too--in this companion book to My Awesome Summer by P. Mantis.


"May 1: Today is my birthday." So begins the wondrous first year of E. Bluebird.

In hilarious, dated journal entries, readers are treated to the intimate details of an Eastern Bluebird's life. "May 8: Eating all these bugs makes me poop. My mom takes my poop sack out of the nest. Good thing." Over the summer she grows in new feathers, watches her siblings leave the nest, and learns to bravely take flight herself--migrating over the winter, and returning to start a family of her own the next year.

Paul Meisel's beautiful, kid-friendly art has been vetted for accuracy by two experts, and more information about Eastern Bluebirds, including a glossary and links for further reading, can be found on the illustrated endpapers.

A companion book, My Awesome Summer by P. Mantis, was an American Association for Advancement of Science/Subaru Science Books & Film Finalist. In a rave review, The New York Times called it "[a] celebration of nature's strangeness and wild wonders."

A Junior Library Guild Selection!
A Bank Street Best Book of the Year

My Awesome Summer by P. Mantis
CCBC Best-of-the-Year List, AAAS /Subaru Finalist, Leaping Lizards Top 10 Read-alouds, SCIENCE Best Books for Curious Kids, Virginia Readers' Choices
My Happy Year by E. Bluebird
A Junior Library Guild Selection
My Stinky Summer by S. Bug
Paul Meisel, who holds a master's degree in graphic design from Yale University, has illustrated many books for children, some of which he also wrote. Two of his I Like to Read® books, See Me Run and I See a Cat, are Theodor Seuss Geisel Award Honor books. His Nature Diary series began with My Awesome Summer by P. Mantis, a finalist for the AAAS/Subaru SB&F Prize for Excellence in Science Books and a Virginia Reader's Choice. The Schmutzy Family, written by Marilyn Rosenberg and illustrated by Paul Meisel, was a National Jewish Book Award Finalist. Paul lives in Connecticut.
"Again relying on his own backyard observations as well as credited experts, Meisel offers a follow-up to his much-admired My Awesome Summer, by P. Mantis (2017). This description of a bluebird's life is straightforward in its content but versatile in its presentation. . . For fledgling readers, another appreciation of the natural world." —Kirkus Reviews

"Like its companion book, My Awesome Summer, by P. Mantis (2017), this volume is called A Nature Diary. In dated entries, a bluebird records her experiences during her first year. . . . Created with acrylic ink and digitally enhanced, Meisel’s handsome artwork shows a strong sense of color and form in depicting the natural world. The larger scenes are particularly striking. In the text, a simply written narrative traces the bluebird’s growth from chick to mother bird, while illustrated notes offer additional facts. A clearly presented, informative introduction to a bird's life cycle."—Booklist

"An Eastern Bluebird narrates a chipper account of her first year, from blind and helpless hatchling to fearful fledgling to full-grown adult . . . with a brief, friendly journal-style text accompanied by equally uncluttered and appealing digitally enhanced paintings in sumptuous colors. Both text and art provide a close-up look at the bird’s growth, behaviors (including seasonal migration), diet, threats, and habitat. The illustrated front and back endpapers are filled with more detailed information about the species, a migration/habitat map, a glossary, information on how to build a bluebird house, and suggested websites."  —The Horn Book

"The dynamic illustrations, rendered in digitally enhanced acrylics, imagine the simple tale in rich colors: a field of orange pumpkins precedes a gray sky full of migrating bluebirds, which segues into scenes featuring the tropical greenery (and predators!) of E. Bluebird’s winter home. A fact-filled introduction and a concluding glossary and resource list offer plenty of detailed information for ornithologically inclined readers."—Publishers Weekly