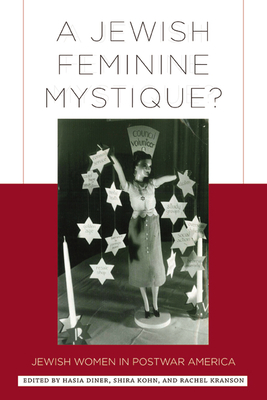 
NONE IN-STORE but we can probably order it for you
In The Feminine Mystique, Jewish-raised Betty Friedan struck out against a postwar American culture that pressured women to play the role of subservient housewives. However, Friedan never acknowledged that many American women refused to retreat from public life during these years. Now, A Jewish Feminine Mystique? examines how Jewish women sought opportunities and created images that defied the stereotypes and prescriptive ideology of the "feminine mystique."

As workers with or without pay, social justice activists, community builders, entertainers, and businesswomen, most Jewish women championed responsibilities outside their homes. Jewishness played a role in shaping their choices, shattering Friedan's assumptions about how middle-class women lived in the postwar years. Focusing on ordinary Jewish women as well as prominent figures such as Judy Holliday, Jennie Grossinger, and Herman Wouk's fictional Marjorie Morningstar, leading scholars explore the wide canvas upon which American Jewish women made their mark after the Second World War.
HASIA R. DINER is the Paul S. and Sylvia Steinberg Professor of American Jewish History and director of the Goldstein-Goren Center for American Jewish History at New York University. She is the author of numerous volumes, including We Remember with Reverence and Love: American Jews and the Myth of Silence after the Holocaust, 1945–1962.
SHIRA KOHN and RACHEL KRANSON are doctoral candidates in New York University's joint Ph.D. program in history and Hebrew and Judaic studies.
"A Jewish Feminine Mystique? succeeds admirably in expanding scholarship on postwar American Jewish women."

"Although no one volume can fill the 'gaping hole' in scholarship about Jewish women in the postwar years, the editors and contributors have made a valiant first effort. Recommended."

"A fascinating anthology. For readers who relish the joy of reading Jewish and American history, this book will be a delight."

"This engaging anthology presents a range of historical cases where the lives of Jewish women in postwar America diverged from the norm of the 1950s suburban housewife."
— Journal of American Ethnic History