Maid of the King's Court (Hardcover) 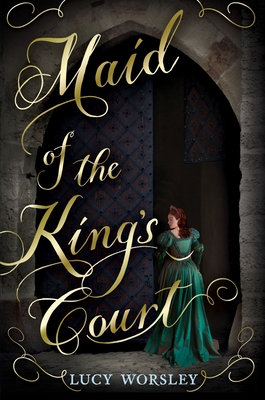 In the vibrant, volatile court of Henry VIII, can even the most willful young woman direct her own fate and follow her heart in a world ruled by powerful men?

Clever, headstrong Elizabeth Rose Camperdowne knows her duty. As the sole heiress to an old but impoverished noble family, Eliza must marry a man of wealth and title — it’s the only fate for a girl of her standing. But when a surprising turn of events lands her in the royal court as a maid of honor to Anne of Cleves, Eliza is drawn into the dizzying, dangerous orbit of Henry the Eighth and struggles to distinguish friend from foe. Is her glamorous flirt of a cousin, Katherine Howard, an ally in this deceptive place, or is she Eliza’s worst enemy? And then there’s Ned Barsby, the king’s handsome page, who is entirely unsuitable for Eliza but impossible to ignore. British historian Lucy Worsley provides a vivid, romantic glimpse of the treachery, tragedy, and thrills of life in the Tudor court.

Lucy Worsley is the chief curator at Historic Royal Palaces. She is also a presenter of programs on royalty and other topics for the BBC. Maid of the King's Court is her young adult novel debut. Lucy Worsley lives in London.

The novel is a satisfying blend of fact and artistic liberty: the women's duties as maids of the court are drawn from history, but Katherine's illicit lover is an amalgam of her two real-life lovers. The retention of British spellings and the inclusion of lesser-known customs of the period add further authenticity. Exhilarating, romantic, and illuminating; has the potential to turn casual readers into Tudor history buffs.
—Kirkus Reviews (starred review)

A thrilling read that is sure to have readers running to a history book, eager to learn more about the facts behind the story.
—Booklist

The dialogue-heavy prose and the courtly intrigues make this historical novel a riveting page-turner...this title will enhance larger collections where historical fiction is in demand.
—School Library Journal

Historian Worsley successfully transports readers into the sixteenth-century world of the wealthy in her debut fiction novel with detailed descriptions of trysts, monthly baths, bowling competitions, and colorful performances of the “Dance of the Gentle Fawn.”
—VOYA

Worsley’s accessible prose, headstrong heroine, and sense of romance may remind readers of Shannon Hale’s work. Eliza’s wit and many courtly adventures make her an engaging companion as she transforms from a naïve girl who describes the king as having “exchanged” Anne Boleyn for a new wife to one intimately involved in the machinations of the court.
—Publishers Weekly Online

Fictional and historical figures and events are woven together seamlessly in Worsley's tale, which challenges readers to reimagine the lives of courtiers and two of Henry's wives, Anne and Katherine, through the eyes of the fictional Elizabeth...Every bit as captivating as Katherine herself, Maid of the King's Court is not to be missed.
—Shelf Awareness for Readers

This book is well written and leaves readers anticipating the events of the next chapter.
—School Library Connection