Ice Bear: Read and Wonder: In the Steps of the Polar Bear (Paperback) 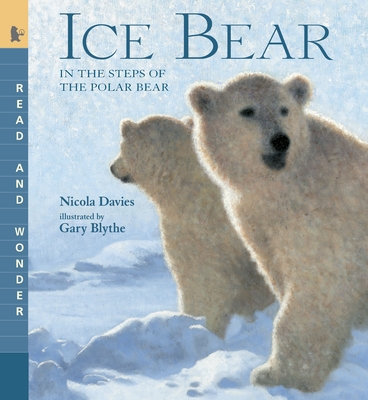 Ice Bear: Read and Wonder: In the Steps of the Polar Bear (Paperback)


NONE IN-STORE but we can probably order it for you
Follow the path of the awe-inspiring polar bear as it strives to survive in an age-old Arctic habitat threatened by global warming.

Huge, magnificent, and solitary, a polar bear moves through the frozen Arctic. Powerful hunter, tireless swimmer, tender mother, gentle playmate — she is superbly adapted for surviving, even thriving, in this harsh and icy climate. Written in poetic language interspersed with fascinating facts, Nicola Davies' breathtaking tale of this massive, stark white animal is brought to life in striking paintings by Gary Blythe. Just as the Inuit people have watched and learned from this amazing creature for generations, readers are invited to witness the majesty of Ice Bear. Back matter includes a note about polar bears and an index.
NICOLA DAVIES is a zoologist and the award-winning author of books for children, including SURPRISING SHARKS, POOP: A NATURAL HISTORY OF THE UNMENTIONABLE, and BAT LOVES THE NIGHT. She says, "I love the emptiness of the Arctic, the stark landscapes and the clear light, but the ability of animals and people to survive in such an unforgiving place fills me with total wonder! Inuit and polar bear are the twin masters of Arctic living, so it seemed natural that they should be together in this book." Nicola Davies lives in Somerset, England.

GARY BLYTHE has illustrated several acclaimed children's books, including BRAM STOKER'S DRACULA and the Kate Greenaway Medal winner THE WHALES' SONG, written by Dyan Sheldon. Of ICE BEAR, he says, "This is my first nonfiction children's book about animals, so just the subject matter alone has provided me with ample inspiration! Ice Bear was a refreshing change of subject matter and palette." Gary Blythe lives in Liverpool, England. This is his first picture book for Candlewick Press.
Dazzlingly illustrated. . . . Natural history for beginners - at its best.
—Washington Post Book World