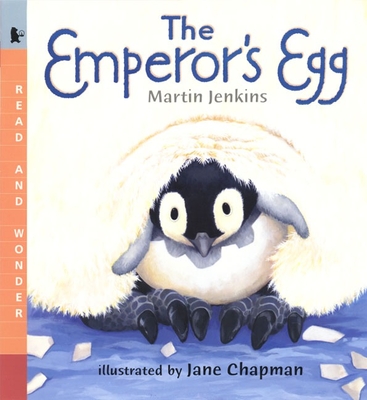 
NONE IN-STORE but we can probably order it for you
Fabulous facts about nature's most devoted dad, in an utterly charming picture book.

Can you imagine spending the winter outdoors in Antarctica without anything to eat? That’s just what the male Emperor penguin does. While his mate is off swimming and catching loads of fish, he stands around in the freezing cold with an egg on his feet for two whole months, keeping it warm and waiting for it to hatch. Welcome to the story of the world’s most devoted dad!
Back matter includes an index.
Martin Jenkins hates cold weather and so has boundless admiration for Emperor penguin dads. While not a father himself—although an uncle and a godfather many times over—Martin Jenkins is a conservation biologist with The World Wildlife Fund and other environmental agencies.

Jane Chapman says she has wanted to paint pictures of penguins ever since her honeymoon when she visited a Scottish zoo and saw penguins waddling along on parade.
The lively text and Jane Chapman’s wonderful illustrations will enthrall youngsters
—School Library Journal

Among the most charming books of 1999 is an usually playful book on biology that you can read with a 2-year-old or use for your second-grader's science report.... quite a perfect children's book, not to mention the fact that it's hard to find good books that celebrate fathers.
—Nick Jr. Magazine