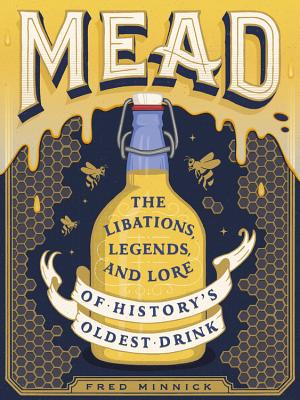 
Email or call for availability
With fantastical narratives, home-brewing instructions, and original craft cocktail recipes, Mead is the ultimate exploration of the resurgent alcoholic beverage that is nearly as old as time itself.

Beloved by figures as diverse as Queen Elizabeth and Thor, the Vikings and the Greek gods, mead is one of history's most storied beverages. But this mixture of fermented honey isn't just a relic of bygone eras -- it's experiencing a cultural renaissance, taking pride of place in trendy cocktail bars and craft breweries across the country. Equal parts quirky historical narrative, DIY manual, and cocktail guide, Mead is a spirited look at the drink that's been with us even longer than wine.

Mead gives readers a fascinating introduction to the rich story of this beloved beverage -- from its humble beginnings to its newfound popularity, along with its vital importance in seven historic kingdoms: Greece, Rome, the Vikings, Poland, Ethiopia, England, and Russia. Pairing a quirky, historical narrative with real practical advice, beverage expert Fred Minnick guides readers through making 25 different types of mead, as well as more than 50 cocktails, with recipes from some of the country's most sought-after mixologists.
Fred Minnick is an award-winning author and spirits expert. His previous titles Whiskey Women, Bourbon Curious, and Bourbon: The Rise, Fall, and Rebirth of an American Spirit paved the way for the artisanal whiskey resurgence, and he is a frequent beverage contributor for major publications, including the Huffington Post and Parade. Fred is the Bourbon Authority for the Kentucky Derby Museum and speaks regularly at nationwide cocktail conferences. He lives in Louisville, Kentucky. Follow him on Twitter @fredminnick
"Minnick sprinkles in his quirky sense of humor here and there - he muses at one point that King Erik Bloodaxe has to be the best Viking name ever - but for the most part he plays the part of researcher and story-teller, a considerable skill he has honed over the course of his notable career as a writer and author (seriously, you can't talk about bourbon literature without mentioning Minnick). ... Mead is for a wide audience, an audience that is ever growing. Once again, Minnick is there to help guide us."
—AlcoholProfessor.com