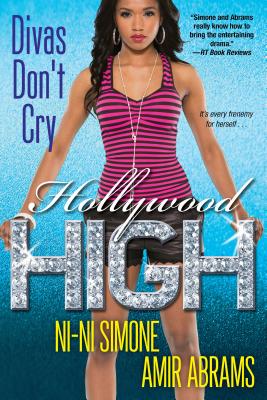 This is book number 6 in the Hollywood High series.

“Simone and Abrams really know how to bring the entertaining drama.”—RT Book Reviews

When the celebrity spotlight burns too hot to handle, Hollywood’s elite Pampered Princesses battle for the ultimate crown. But once their secrets are exposed, who will be the last teen diva standing?

She’s finally free of her overbearing mother and too much heartbreak. Now supermodel London Phillips is going to get back her billionaire ex—on her own terms. But settling old scores and destroying her former bestie, Rich Montgomery, could wreck her best shot at happiness . . .

After all the high-maintenance stunts she’s pulled, Rich will do even worse to hang onto her thug in shining armor. But obsessive jealousy and an unexpected shocker will detonate
mega-drama—and spiral her life way out of control . . .

Dirty little secrets deployed for maximum damage are Spencer Ellington’s specialty. But when she digs up her family’s skeletons it could blow up in her pretty face—and destroy more than she imagined . . .

Still reeling from betrayal and a crash-and-burn comeback, Heather Cummings has nada to lose. And if her reckless moves to become the ultimate queen-B lays total waste to the Pampered Princesses, may the most ruthless diva win . . .
Ni-Ni Simone is a Jersey girl with an obsession for reality TV and celebrity gossip. She never intended to write teen fiction, but her editor and the literary gods had other plans. She whipped up her first novel, Shortie Like Mine, in two weeks, and has been in love with writing ever since. Shortie was the first of Ni-Ni’s books to be selected by YALSA (Young Adult Library Services Association) as a Quick Pick for Reluctant Young Adult Readers, and it’s also a Virginia Readers’ Choice Selection. When she’s not writing, Ni-Ni is soaking up inspiration from music, TV, and most of all, the teens out there hanging tough no matter what comes their way. Ni-Ni lives in North Jersey with her husband and their children. Visit her online at ninisimone.com, on Facebook @ NiNiSimoneOfficialFanPage, and follow her on Twitter @IamNiNiSimone.

Amir Abrams is a regular dude with a dream. Born in Brooklyn, Amir has a thing for fresh kicks, fly whips, and all things Polo. For Amir, writing teen fiction was never something he imagined himself doing until he started working with Ni-Ni Simone on the Hollywood High series. In addition to the Hollywood High series, he is also the author of Crazy Love, The Girl of His Dreams, Caught Up, Diva Rules, and Chasing Butterflies. You can hit him up at amir_abrams@yahoo.com, on Facebook at itsyaboyamir, or follow him on Twitter @ItsyaboyAmir.