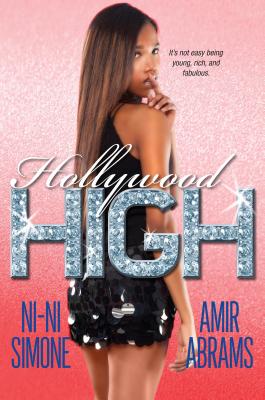 This is book number 1 in the Hollywood High series.

They're the daughters of celebrities-the kind all the teen mags gossip about But the It Girls of Hollywood High are about to discover that fame has a price. And no friendship-or romance-is safe.... London Phillips will diet as her mother demands. She'll even date the billionaire her mother has chosen for her. But she won't give up her secret hottie, Justice Banks. And she's willing to do whatever she has to do in order to keep him, even if it means scheming on a best friend. Rich Montgomery is the self-appointed queen of the hottest clique at Hollywood High, the Pampered Princesses. With her finger on the pulse of everyone's drama, Rich has loyalty to no one but herself. Spencer Ellington hates to see anyone's boyfriend go to waste. With her angelic smile and cunning ways, with a friend like her who needs enemies? Heather Cummings is the star of her own television show and has rightfully earned her spot as one of the Pampered Princesses. But when her seething dislike for them spirals out of control, she finds herself with more trouble than she'd bargained for. . . .
Ni-Ni Simone is a Jersey girl with an obsession for reality TV and celebrity gossip. She never intended to write teen fiction, but her editor and the literary gods had other plans. She whipped up her first novel, Shortie Like Mine, in two weeks, and has been in love with writing ever since. Shortie was the first of Ni-Ni's books to be selected by YALSA (Young Adult Library Services Association) as a Quick Pick for Reluctant Young Adult Readers, and it's also a Virginia Readers' Choice Selection. When she's not writing, Ni-Ni is soaking up inspiration from music, TV, and most of all, the teens out there hanging tough no matter what comes their way. Ni-Ni lives in North Jersey with her husband and their children. Visit her online at ninisimone.com, on Facebook @ NiNiSimoneOfficialFanPage, and follow her on Twitter @IamNiNiSimone. Amir Abrams is a regular dude with a dream. Born in Brooklyn, Amir has a thing for fresh kicks, fly whips, and all things Polo. For Amir, writing teen fiction was never something he imagined himself doing until he started working with Ni-Ni Simone on the Hollywood High series. In addition to the Hollywood High series, he also penned Crazy Love, The Girl of His Dreams, Caught Up, and Diva Rules. You can hit him up at amir_abrams@yahoo.com, on Facebook at itsyaboyamir, or follow him on Twitter @ItsyaboyAmir.