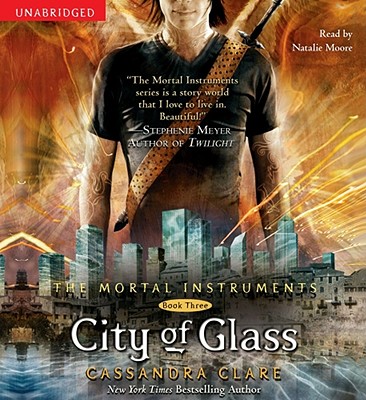 By Cassandra Clare, Natalie Moore (Read by)
Email or call for price
Hard to Find

Love is a mortal sin, and the secrets of the past are deadly. Plunge into the third installment novel in the internationally bestselling Mortal Instruments series and “prepare to be hooked” (Entertainment Weekly)—now with a gorgeous new cover, a map, a new foreword, and exclusive bonus content! City of Glass is a Shadowhunters novel.

Cassandra Clare is the author of the #1 New York Times, USA TODAY, Wall Street Journal, and Publishers Weekly bestselling Shadowhunter Chronicles. She is also the coauthor of the bestselling fantasy series Magisterium with Holly Black. The Shadowhunter Chronicles have been adapted as both a major motion picture and a television series. Her books have more than fifty million copies in print worldwide and have been translated into more than thirty-five languages. Cassandra lives in western Massachusetts with her husband and three fearsome cats. Visit her at CassandraClare.com. Learn more about the world of the Shadowhunters at Shadowhunters.com.

Natalie Moore's theater credits include Mariane in The Miser at the La Jolla Playhouse as well as work at the Guthrie Theater, Actors' Theater of Louisville, A.R.T, Theatre de la Jeune Lune, Santa Fe Stages, Minneapolis Children's Theater, and Park Square. She has also been seen on Late Night with Conan O'Brien.