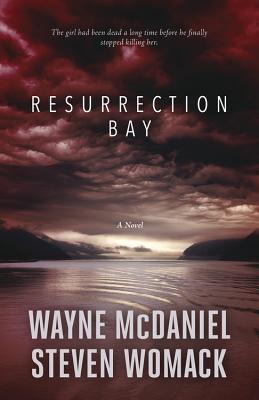 From Edgar Award-winning author Steven Womack and Wayne McDaniel comes a force of evil on par with Hannibal Lector in a heart-pounding page-turner you can't put down.

Decatur Kaiser seems like an ordinary family man with a passion for hunting and a wall full of trophies to prove it. Every June, Decatur sends his wife and kids to visit the grandparents so he can start his summer project.

Fueled by cocaine and a complete disregard for human life, Decatur kidnaps a young woman and flies to a deserted island in the middle of Resurrection Bay. There he abuses and tortures her, then turns his victim loose and hunts her like big game through the Alaskan wilderness.

Inspired by the real-life story of Alaska's most famous serial killer, Resurrection Bay is a classic study of evil: where it comes from, how it operates, and what it takes to bring it down.

"Fast-paced, exciting, and ever so gruesome, count Resurrection Bay at the top of your summer reading list, and Wayne McDaniel and Steven Womack as two authors to watch." --SUSPENSE MAGAZINE

Wayne McDaniel (New York, NY) received an MFA from Columbia University and works as a screenwriter. Resurrection Bay is his debut novel.Steven Womack (Nashville, TN) is the author of the Edgar and Shamus Award-winning Harry James Denton series and the critically acclaimed Jack Lynch series. A member of the Writer's Guild of America, he co-wrote the ABC-TV Movie Volcano: Fire On The Mountain. He is also a professor of screenwriting at the Watkins Film School in Nashville, Tennessee.