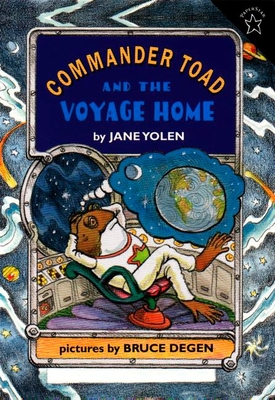 This is book number 7 in the Commander Toad series.

After many long days in the dark of space, the crew of the Star Warts is thinking longingly of home. But when Mr. Hop sets a course for HOME, the spaceship zeroes in on an uncharted planet. The intrepid crew sets out to explore, and Commander Toad stumbles into an extraordinary discovery -- one that gives a new meaning to home. Join these much-loved characters in a toadally new adventure, full of groan-worthy puns and visual jokes.


"Children will be delighted to find puns in the illustrations." -School Library Journal