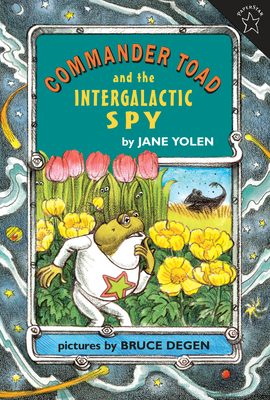 This is book number 5 in the Commander Toad series.

The Star Warts is on a dangerous mission to an intergalactic spy convention, to find Agent 007½. Not only is he Space Fleet's greatest spy and a master of disguise, but he is also Commander Toad's cousin, Tip Toad. It's essential that no other spy see Agent 007½ without his disguise. Will Commander Toad be able to recognize his cousin in time?.

Jane Yolen’s books and stories have won the Caldecott Medal, two Nebula Awards, two Christopher Medals, the World Fantasy Award, three Mythopoeic Fantasy Awards, the Golden Kite Award, the Jewish Book Award, the World Fantasy Association’s Lifetime Achievement Award, and the Association of Jewish Libraries Award among many others.
"This time Commander Toad is in seach of an intergalactic spy who is his cousin. . . . As usual, Yolen plays amusing games with words." --Booklist

"Children will be delighted to discover puns in the illustrations." --School Library Journal