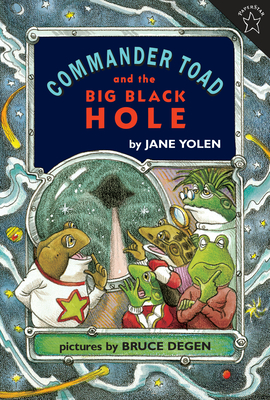 This is book number 3 in the Commander Toad series.

Commander Toad and his crew on the Star Warts come across a black hole while leapfrogging across the galaxy. Something long, pink, and sticky grabs their spaceship and it isn't space gum--it's the tongue of an E. T. T - an Extra Terrestrial Toad! When all else fails, Commander Toad has to resort to a secret weapon from his past to save the ship from toad-al destruction.

Fans of DK Readers: LEGO Star Wars, Tom Angleberger's Origami Yoda, and silliness will toad-ally love Commander Toad!
Jane Yolen is an author of children’s books, fantasy, and science fiction, including Owl Moon, The Devil’s Arithmetic, and How Do Dinosaurs Say Goodnight? She is also a poet, a teacher of writing and literature, and a reviewer of children’s literature. She has been called the Hans Christian Andersen of America and the Aesop of the twentieth century.

Jane Yolen’s books and stories have won the Caldecott Medal, two Nebula Awards, two Christopher Medals, the World Fantasy Award, three Mythopoeic Fantasy Awards, the Golden Kite Award, the Jewish Book Award, the World Fantasy Association’s Lifetime Achievement Award, and the Association of Jewish Libraries Award among many others.
"Yolen pokes fun at the patterned Sleeping-princess story in a tale that's written with brisk simplicity and humor. . . It is amusing, it has plenty of action, and it's easy to read." --The Bulletin of the Center for Children's Books

"[A] light, bright twist on the romantic tale." --Kirkus Reviews

"A clever turn on a traditional tale." --School Library Journal