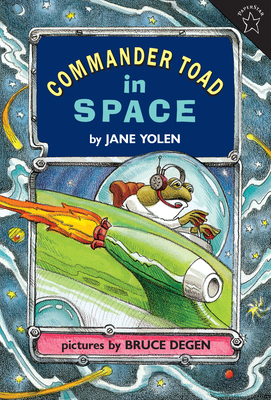 This is book number 1 in the Commander Toad series.

Brave Commander Toad and the crew of the spaceship Star Warts have a mission: they must go where no spaceship has gone before and bring a little bit of earth out to the alien stars. But when they try to land their sky skimmer on the planet made of water, a terrible sound rises from the waves. Deep Wader is not pleased at being disturbed. "This planet belongs to me," he roars. It looks as though the crew of the Star Warts might become the monster's lunch.

Jane Yolen’s books and stories have won the Caldecott Medal, two Nebula Awards, two Christopher Medals, the World Fantasy Award, three Mythopoeic Fantasy Awards, the Golden Kite Award, the Jewish Book Award, the World Fantasy Association’s Lifetime Achievement Award, and the Association of Jewish Libraries Award among many others.
★"Any beginning-to-read book with brave space explorers, a ship named 'Star Warts,' and a monster who calls himself Deep Wader would be popular almost by any definition." --Booklist, starred review