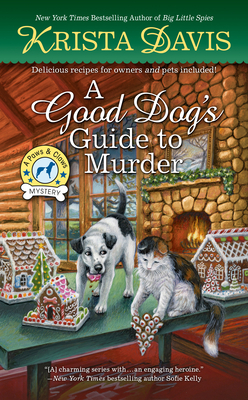 This is book number 8 in the A Paws & Claws Mystery series.

The great Gingerbread Dog & Cat House competition has come to Wagtail, along with another murder to solve for Holly and her supersmart Jack Russell terrier Trixie in the New York Times bestselling Paws & Claws series by Krista Davis!

Visitors are arriving in droves to spend Thanksgiving in the mountains of pet-friendly Wagtail, Virginia. Many of them are bringing dog and cat gingerbread houses to enter in the contest that will be held in the new convention center. Wagtail resident Orly Biffle bequeathed the land to the town in his will, provided that they not cut down the grand old oak tree on the property. Orly’s children are mighty miffed that they didn’t inherit the prime piece of property overlooking the lake.

Holly notices that Trixie and Twinkletoes, her calico kitty, are fixated on the big oak tree. Trixie barks at it as though she thinks it’s a corpse! Just as contestants are spicing up their sweet gingerbread creations, the majestic tree drops an enormous limb. The mayor declares that the tree is dangerous and must come down. When a bulldozer churns up some roots, the tree falls over on its own accord revealing a body inside the trunk! Initially, everyone suspects this unsavory trick was Orly’s doing. But it soon becomes clear that someone is trying to keep the truth under wraps. Trixie and Twinkletoes now have to help Holly sniff out some suspects and leash a conniving killer.

"Davis has created a town that any pet would love—as much as their owners do. And they won't let a little thing like murder spoil their enjoyment."—Sheila Connolly, New York Times bestselling author of the County Cork, Museum, and Orchard Mysteries

"The intriguing plot twists will keep you guessing to the very last page."—Kate Carlisle, New York Times bestselling author of the Bibliophile Mysteries