From Little Tokyo, with Love (Hardcover) 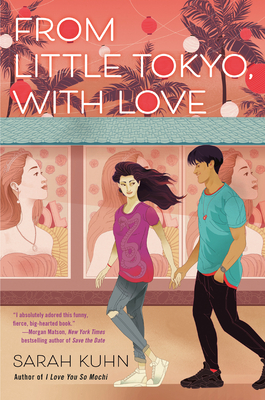 From Little Tokyo, with Love (Hardcover)


NONE IN-STORE but we can probably order it for you
One of PEOPLE Magazine's Best Books of Summer!

Celebrated author Sarah Kuhn reinvents the modern fairy tale in this intensely personal yet hilarious novel of a girl whose search for a storybook ending takes her to unexpected places in both her beloved LA neighborhood and her own guarded heart.

If Rika's life seems like the beginning of a familiar fairy tale—being an orphan with two bossy cousins and working away in her aunts' business—she would be the first to reject that foolish notion. After all, she loves her family (even if her cousins were named after Disney characters), and with her biracial background, amazing judo skills and red-hot temper, she doesn't quite fit the princess mold.

All that changes the instant she locks eyes with Grace Kimura, America's reigning rom-com sweetheart, during the Nikkei Week Festival. From there, Rika embarks on a madcap adventure of hope and happiness—searching for clues that Grace is her long-lost mother, exploring Little Tokyo's hidden treasures with cute actor Hank Chen, and maybe . . . finally finding a sense of belonging.

But fairy tales are fiction and the real world isn't so kind. Rika knows she's setting herself up for disappointment, because happy endings don't happen to girls like her. Should she walk away before she gets in even deeper, or let herself be swept away?
Sarah Kuhn is the author of the popular Heroine Complex novels—a series starring Asian American superheroines. The first book is a Locus bestseller, an RT Reviewers' Choice Award nominee, and one of the Barnes & Noble Sci-Fi & Fantasy Blog's Best Books of 2016. Her YA debut, the Japan-set romantic comedy I Love You So Mochi, is a Junior Library Guild selection and a nominee for YALSA's Best Fiction for Young Adults. She has also penned a variety of short fiction and comics, including the critically acclaimed graphic novel Shadow of the Batgirl for DC Comics and the Star Wars audiobook original Doctor Aphra. Additionally, she was a finalist for both the CAPE (Coalition of Asian Pacifics in Entertainment) New Writers Award and the Astounding Award for Best New Writer. Her newest novel, From Little Tokyo, With Love—a modern fairy tale with a half-Japanese heroine—is a Junior Library Guild selection and was recently chosen as Penguin Random House’s One World, One Book title of the year. A third generation Japanese American, she lives in Los Angeles with her husband and an overflowing closet of vintage treasures.

"Evocatively written and beautiful in its rage, From Little Tokyo, With Love is one to treasure. To mixed race readers especially, this one's for you. Few heroines have spoken to me like Rika Rakuyama."
—Helen Hoang, USA Today bestselling author of The Kiss Quotient

"A heartfelt modern-day fairy tale that delivers a sweet romance alongside a thoughtful exploration of identity. From Little Tokyo, With Love takes you on an adventure through Los Angeles–full of family secrets and hidden histories—and its indelible characters will stick with you long after you’ve reached the happily ever after."
—Maurene Goo, author of Somewhere Only We Know

"This book completely swept me away. Brimming with rich culture and a city that demands to be seen in all its colors and complexities, Sarah Kuhn’s latest novel is a beautiful love letter to biracial kids that’s full of longing, hope, and so much heart.”
—Akemi Dawn Bowman, author of William C. Morris Award Finalist Starfish and The Infinity Courts series

"Readers will cheer for tough-but-tender Rika as she navigates the city of Los Angeles—and her own complicated emotions—in search of love, family, and belonging in this heartwarming pick-me-up of a novel."
—Misa Sugiura, award-winning author of It's Not Like It's a Secret

"Written like a modern fairy tale, this is a thoughtful exploration of finding one’s full identity and sense of place and community...A beautiful and entertaining blend of family, romance, and self-discovery."
—Kirkus Reviews

"Kuhn has created a protagonist who doesn’t fit the mold of a typical 'princess.' Instead, she is spirited, fearless, real, and fights tirelessly for what her heart desires. The enthralling dialogue will keep readers engaged as they put together the pieces of the puzzle."
—School Library Journal