The Valley and the Flood (Paperback) 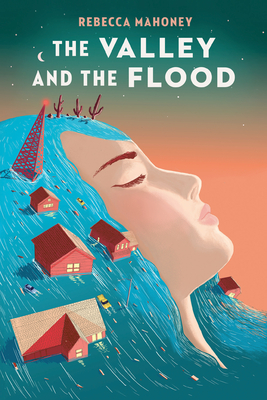 The Valley and the Flood (Paperback)

“Luminous and haunting, Rebecca Mahoney’s shimmering debut examines PTSD and grief through a speculative lens that resonates powerfully. It is a sweet sort of ache to watch Rose battle and overcome her trauma. It is addictive to watch the residents of Lotus Valley learn to live amongst their own unnatural ghosts. You will be swept away by this tale.”
— Laura Graveline, Brazos Bookstore, Houston, TX

"A tense and beautiful tale about the monsters we make and the memories that haunt us." —Kate Alice Marshall, author of I Am Still Alive and Rules for Vanishing

Rose Colter is almost home, but she can't go back there yet. When her car breaks down in the Nevada desert, the silence of the night is broken by a radio broadcast of a voicemail message from her best friend, Gaby. A message Rose has listened to countless times over the past year. The last one Gaby left before she died.

So Rose follows the lights from the closest radio tower to Lotus Valley, a small town where prophets are a dime a dozen, secrets lurk in every shadow, and the diner pie is legendary. And according to Cassie Cyrene, the town's third most accurate prophet, they've been waiting for her. Because Rose's arrival is part of a looming prophecy, one that says a flood will destroy Lotus Valley in just three days' time.

Rose believes if the prophecy comes true then it will confirm her worst fear—the PTSD she was diagnosed with after Gaby's death has changed her in ways she can't face. So with help from new friends, Rose sets out to stop the flood, but her connection to it, and to this strange little town, runs deeper than she could've imagined.

Debut author Rebecca Mahoney delivers an immersive and captivating novel about magical places, found family, the power of grief and memory, and the journey toward reconciling who you think you've become with the person you've been all along.
Rebecca Mahoney is a young adult and middle grade writer, and the co-creator of audio drama serial The Bridge Podcast. She's a strong believer in the cathartic power of all things fantastical and creepy in children's literature--and she knows firsthand that ghosts, monsters, and the unknown can give you the language you need to understand yourself. She was raised in Windham, New Hampshire, currently resides in Somerville, Massachusetts, and spends her spare time watching horror movies, collecting cloche hats, and cursing sailors at sea. She can be found on Twitter @cafecliche.
Praise for The Valley and the Flood

★ "Mahoney has crafted a wholly unique world, replete with mysterious, otherworldly “neighbors” and a foreboding prophecy that Rose’s arrival in town willbring about an apocalyptic flood...[a] poignant exploration of emotion and trauma." —Booklist, starred review

"Refreshingly, wholly original, The Valley and the Flood will haunt you long after you turn the final page. A beautiful triumph of a debut." —Sarah Glenn Marsh, author of the Reign of the Fallen series

"Rebecca Mahoney weaves a tense and beautiful tale about the monsters we make and the memories that haunt us. With the looming threat of the Flood and a town full of secrets, this story grabbed hold of me and didn't let go." —Kate Alice Marshall, author of I Am Still Alive and Rules for Vanishing

"Strong and cinematic, and well worth going along with for the ride." —The Horn Book