The Head of the Saint (Hardcover) 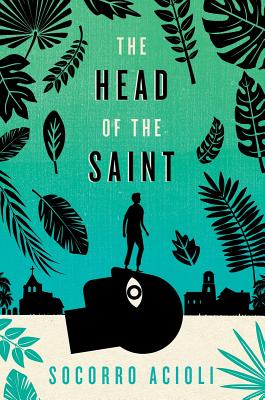 By Socorro Acioli, Daniel Hahn (Translated by)
$29.99
Email or call for price.

A quirky story of love, mischief, and forgiveness from Brazil’s foremost award-winning author for young readers, in her U.S. debut.

Fourteen-year-old Samuel is newly orphaned and homeless in a small town in Brazil. He lives in a giant, hollow, concrete head of St. Anthony, the lingering evidence of the village’s inept and failed attempt to build a monolith over a decade ago. He didn’t know what it was when he crawled into it, seeking shelter during a storm, but since coming there, he hears beautiful singing, echoing like magic in the head twice a day. So he stays.

Miraculously, he can also hear the private prayers and longings of the villagers. Feeling mischievous, Samuel begins to help answer these prayers, hoping that if he does, their noise will quiet down and he can listen to the beautiful singing in peace. Ironically, his miracles gain him so many fans that he starts to worry he will never fulfill his own true longing and find the source of the singing.

Filled with beautiful turns of phrase and wonderfully quirky characters, The Head of the Saint is a riotous story of faith and magic that won’t soon leave your thoughts.

Socorro Acioli was born in Fortaleza, Ceara, Brazil. She is a journalist and has a master’s degree in Brazilian literature and a PhD in literary studies. She started her writing career in 2001 and since then has published books in various genres, including children’s short stories and YA novels, and has received Brazil’s most prestigious award for children’s literature, the Jabuti Prize.

In 2006, she was selected to take part in a workshop conducted by Nobel Prize winner Gabriel García Márquez. The author was selected by García Márquez himself based on her synopsis for The Head of the Saint. In 2007, she was a visiting researcher at a university in Germany, and she has lectured in several other countries, including Portugal, Bolivia, and Cape Verde. Socorro is also a translator, essayist, and literary theory teacher.

“…the unexplained miracles, intricately entwined stories, and long-buried family secrets would be at home in a García Márquez novel…With an offbeat approach and beautiful, evocative language, this unusual, fablelike novel will appeal to literary-minded teens.” —Booklist starred review

“Indeed, all of humanity and no small measure of godliness are on display in this translated Brazilian import that evokes a sense of wonder and treats readers to a fascinating glimpse of a setting and worldview seldom seen in Anglophone youth literature.” —The Bulletin of the Center for Children's Books starred review