Up to This Pointe (Paperback) 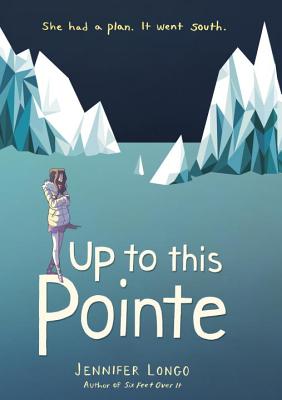 By Jennifer Longo
$9.99
Email or call for price.

Hand this utterly unique contemporary YA to anyone who loves ballet or is a little too wrapped up in their Plan A.
(It's okay to fail, people )
Harper had a plan. It went south.
Harper Scott is a dancer. She and her best friend, Kate, have one goal: becoming professional ballerinas. And Harper won't let anything--or anyone--get in the way of The Plan, not even the boy she and Kate are both drawn to.
Harper is a Scott. She's related to Robert Falcon Scott, the explorer who died racing Amundsen and Shackleton to the South Pole. Amundsen won because he had a plan, and Harper has always followed his model. So when Harper's life takes an unexpected turn, she finagles (read: lies) her way to the icy dark of McMurdo Station . . . in Antarctica. Extreme, but somehow fitting--apparently she has always been in the dark, dancing on ice this whole time. And no one warned her. Not her family, not her best friend, not even the boy who has somehow found a way into her heart. It will take a visit from Shackleton's ghost--the explorer who didn't make it to the South Pole, but who got all of his men out alive--to teach Harper that success isn't always what's important, sometimes it's more important to learn how to fail successfully.
An Indie Next List Selection
"Longo makes Harper a standout character of fire, commitment, and sass." --The Bulletin, Starred Review

"A stunning love letter to ballet and San Francisco. . . . The perfect meld of adorable and heart-wrenching." --Shelf Awareness, Starred Review
"One of the most breathtaking explorations of navigating heartbreak that I've ever read. This is one for the ages." --Martha Brockenbrough, author of The Game of Love and Death

JENNIFER LONGO was a ballerina from ages eight to eighteen, until she eventually (reluctantly) admitted her talent for writing exceeded her talent for dance. The author of Six Feet Over It and Up to This Pointe, she holds an MFA in Writing for Theater from Humboldt State University, where her obsessive love of Antarctica produced her thesis play about Antarctica's Age of Exploration. Jennifer lives in Seattle with her husband and daughter and writes about writing at jenlongo.com.