Up to This Pointe (Hardcover) 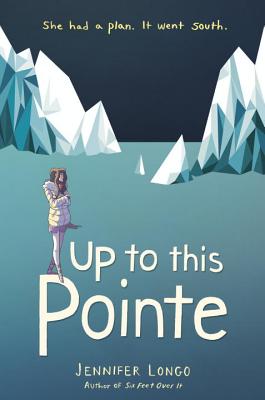 Harper had a plan. It went south. Hand this utterly unique contemporary YA to anyone who loves ballet or is a little too wrapped up in their Plan A. (It's okay to fail, people!)

Harper Scott is a dancer. She and her best friend, Kate, have one goal: becoming professional ballerinas. And Harper won’t let anything—or anyone—get in the way of The Plan, not even the boy she and Kate are both drawn to.

Harper is a Scott. She’s related to Robert Falcon Scott, the explorer who died racing Amundsen and Shackleton to the South Pole. Amundsen won because he had a plan, and Harper has always followed his model. So when Harper’s life takes an unexpected turn, she finagles (read: lies) her way to the icy dark of McMurdo Station . . . in Antarctica. Extreme, but somehow fitting—apparently she has always been in the dark, dancing on ice this whole time. And no one warned her. Not her family, not her best friend, not even the boy who has somehow found a way into her heart. It will take a visit from Shackleton's ghost--the explorer who didn't make it to the South Pole, but who got all of his men out alive--to teach Harper that success isn't always what's important, sometimes it's more important to learn how to fail successfully.

"A stunning love letter to ballet and San Francisco, Jennifer Longo's (Six Feet Over It) quirky sophomore novel, Up to This Pointe, is the perfect meld of adorable and heart-wrenching." —Shelf Awareness, Starred Review

"One of the most breathtaking explorations of navigating heartbreak that I've ever read. This is one for the ages." —Martha Brockenbrough, author of The Game of Love and Death

"Longo's book brings the reader intimately into Harper's heartbreak and healing in a way that will speak to readers of all ages." —Anna Eklund, University Book Store, Seattle, WA

"Incisively written. Longo makes it easy to commiserate with Harper as she tries to move past disappointment and envision a new path forward." —Publishers Weekly

"Harper is a well-developed, relatable character. Her inner monologue is witty and dominates most of the novel, giving a unique perspective. . . . A recommended read for determined teens with an interest in following and exploring their dreams." —School Library Journal

"Harper’s temporary Antarctic life is evoked with as much vivid, fascinating detail as her 'second home,' the ballet studio. . . . An affecting, memorable examination of disappointment and loss." —The Horn Book Review

"Longo's fabulous depiction of McMurdo and the winter residents captures the beauty, humor, and danger of such an isolated existence. An adventure story with lots of heart." —Booklist

JENNIFER LONGO was a ballerina from ages eight to eighteen, until she eventually (reluctantly) admitted her talent for writing exceeded her talent for dance. The author of Six Feet Over It, she holds an MFA in Writing for Theater from Humboldt State University, where her obsessive love of Antarctica produced her thesis play about Antarctica’s Age of Exploration. Jennifer lives in Seattle with her husband and daughter and writes about writing at jenlongo.com.

“A stunning love letter to ballet and San Francisco, Jennifer Longo's (Six Feet Over It) quirky sophomore novel, Up to This Pointe, is the perfect meld of adorable and heart-wrenching.”
─Shelf Awareness starred review

“The book is…savvy and detailed about the Antarctic and life on the ice, with McMurdo’s combination of industrial site and summer camp vividly conveyed… Fans of McCaughrean’s The White Darkness will definitely want a look; even determinedly frost-free readers, though, will sympathize with Harper’s upheaval at failing to become one of the chosen few.” —Bulletin starred review


“A moving love letter to dance, dreams, and San Francisco, and a look at how embracing personal passion leads to fulfillment (even if it wasn't part of the plan).” ─Kirkus Reviews

“An adventure story with lots of heart.” ─Booklist

“Longo (Six Feet Over It) makes it easy to commiserate with Harper as she tries to move past disappointment and envision a new path forward.” ─Publishers Weekly