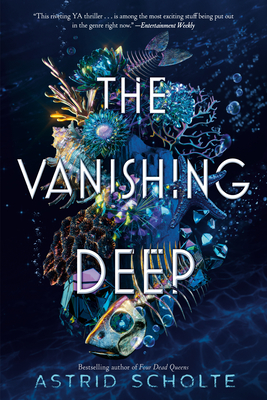 
On Our Shelves Now
Bestselling author Astrid Scholte returns with a thrilling adventure in which the dead can be revived . . . for a price. Now in paperback.

Ever since her sister, Elysea, drowned, seventeen-year-old Tempe's been looking for answers. And for a price, Tempe will finally get them . . . from her dead sister. On the nearby island of Palindromena, the research facility, once paid, will revive the dearly departed for a period of twenty-four hours before returning them to death.

It isn't a heartfelt reunion that Tempe is after, though. Elysea died keeping a terrible secret, one that has ignited an unquenchable fury in Tempe: finally, she'll know the truth about their parents' deaths.

Instead of answers, Elysea persuades Tempe to break her out of the facility to embark on a dangerous journey to discover the truth and mend their broken bond before Elysea's time runs out. Complicating matters, they're pursued every step of the way by two Palindromena employees desperate to find them before the secret behind the revival process and the true cost of restored life is revealed.
Raised on a diet of Spielberg, Lucas and Disney, Astrid Scholte knew she wanted to be surrounded by all things fantastical from a young age. She's spent the last ten years working in film, animation and television as both an artist and a manager. Career highlights include working on James Cameron's Avatar, Steven Spielberg's The Adventures of Tintin and George Miller's Happy Feet Two. She lives in Melbourne, Australia, with her fiancé and two cats, Lilo and Mickey. Her debut YA novel, Four Dead Queens, was an international bestseller.
Praise for The Vanishing Deep:
A 2022 Isinglass Teen Readers' Choice Award Long List Pick
A 2021 Texas Tayshas Reading List Pick
A Spring 2020 Apple Most Anticipated Book

“This riveting YA thriller . . . is among the most exciting stuff being put out in the genre right now.” —Entertainment Weekly

"[In] this fast-paced ecological thriller . . . Scholte builds palpable suspense through Lor and Tempe's alternating narratives while offering timely commentary on sustainability and responsible stewardship of land and sea." —Publishers Weekly

"Scholte's intricate world building stands out from the usual run of post-apocalyptic novels, with a particular emphasis on the effects of a world steeped in overconsumption and an eco-apocalypse. . . Readers will be left with deep questions about personal sacrifice and emotional closure." —The Bulletin of the Center for Children’s Books

“A good, devious mix of some of the best fantasy and murder mystery that YA has had to offer recently.” —Entertainment Weekly

“Astrid Scholte's propulsive debut YA novel checks all the boxes for an addictive read.” —Refinery29

“Four Dead Queens is a darkly delicious tale that keeps you in constant suspense. A thrilling, genre-blending book perfect for fans of both fantasy and murder mysteries. I just might be the fifth dead queen because this story—with its labyrinthine twists and turns—slayed me in every possible way.” —Kerri Maniscalco, #1 New York Times and USA Today bestselling author of the Stalking Jack the Ripper series

“A cinematic thrill ride brimming with murder, mayhem, and twists that will shock you, Four Dead Queens is sure to be your next obsession. Absolutely riveting.” —Sarah Glenn Marsh, author of the Reign of the Fallen series

“Astrid Scholte breaks into the fantasy genre with a triumphant, exciting debut that will keep readers guessing all the way to final chapter. Four Dead Queens is not to be missed!” —Beth Revis, New York Times bestselling author of Give the Dark My Love