Too Many Toys (Hardcover) 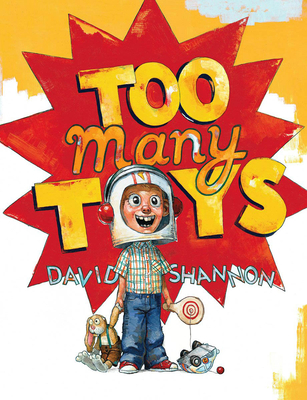 “Spencer has too many toys and David Shannon's wonderfully bold illustrations show us just how many. As Spencer decides which toys he can part with by putting them in a big empty box, he realizes that perhaps he can part with the toys, but the box, well, that's another story. Children will relate to this humorous story.”
— Lisa Fabiano, Wellesley Booksmith, Wellesley, MA

Spencer has too many toys! His father trips over them, his mother falls over them, and the house is overflowing with junk. Now its time to give some of the mountain of goodies away, but Spencer finds it hard. In the end, he fills a box, but decides the one toy he can't part with is the box!

David Shannon is the internationally acclaimed creator of more than thirty picture books, including No, David!, a Caldecott Honor Book and his second New York Times Best Illustrated Book of the Year, and three more David picture books. Shannon's bestsellers include A Bad Case of Stripes, Duck on a Bike, and his recent Bugs in My Hair. He lives in California with his family.

* "A master at capturing the workings of a young mind, Shannon combines realistic dialogue with his boisterous illustrations to create another surefire hit. This book provides a pertinent and appealing read." – School Library Journal (starred review)
"Shannon's sardonic wit will strike a chord with parents and children alike." – Kirkus Reviews