Cathedral: The Story of Its Construction (Paperback) 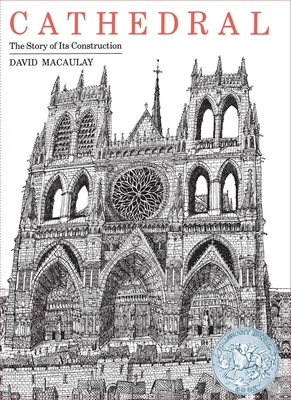 Cathedral: The Story of Its Construction (Paperback)

Readers worldwide recognize Caldecott Medal winner David Macaulay's imaginary Cathedral of Chutreaux. This critically acclaimed book has been translated into a dozen languages and remains a classic of children's literature and a touchstone for budding architects. Cathedral's numerous awards include a prestigious Caldecott Honor and designation as a New York Times Best Illustrated Book of the Year for Macaulay's intricate pen-and-ink illustrations.

Journey back to centuries long ago and visit the fictional people of twelfth-, thirteenth-, and fourteenth-century Europe whose dreams, like Cathedral, stand the test of time.

This title has been selected as a Common Core text exemplar (Grades 6–8, Informational Texts: Science, Mathematics, and Technical Studies).

David Macaulay is an award-winning author and illustrator whose books have sold millions of copies in the United States alone, and his work has been translated into a dozen languages. Macaulay has garnered numerous awards including the Caldecott Medal and Honor Awards, the Boston Globe–Horn Book Award, the Christopher Award, an American Institute of Architects Medal, and the Washington Post–Children’s Book Guild Nonfiction Award. In 2006, he was the recipient of a MacArthur Fellowship, given “to encourage people of outstanding talent to pursue their own creative, intellectual, and professional inclinations.” Superb design, magnificent illustrations, and clearly presented information distinguish all of his books. David Macaulay lives with his family in Vermont.

"This marvelous book recreates the building of a French Gothic cathedral from the hewing down of half a forest to the placement of the last sheet of lead on the spire. Macaulay uses voluminous knowledge and pen-and-ink sketches accompanied by a brief clear narrative." Time Magazine —