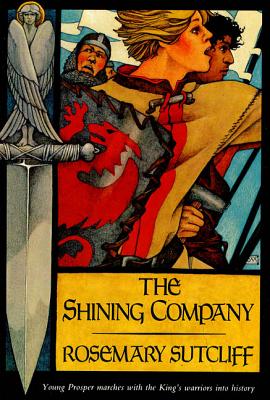 Life is secure and peaceful for young Prosper, second son of Gerontius, until the day Prince Gorthyn arrives with his hunting party. Prosper's unusual daring in the hunt catches the prince's attention, and he promises to make Prosper his shield-bearer when he comes of age. Two years later, three hundred princes are summoned to the king's fortress at Dyn Eidin, where they will prepare to fight the Saxon forces which are gaining strength in the east. Prosper, with Conn, his bondservant, leaves his father's lands to join Gorthyn in the rigorous training for battle. With the coming of spring, word reaches the Three Hundred Companions that the Saxon leader has taken yet another kingdom. They set out at once for the Saxon stronghold of Catraeth, where Prosper must face the greatest challenges of his life.
Adventure and heroism against impossible odds create a moving, robust tale set in Britain in the eighth century and based on actual events.

Rosemary Sutcliff (1920-1992) wrote dozens of books for young readers, including her award-winning Roman Britain trilogy, The Eagle of the Ninth, The Silver Branch, and The Lantern Bearers, which won the Carnegie Medal. The Eagle of the Ninth is now a major motion picture, The Eagle, directed by Kevin MacDonald and starring Channing Tatum. Born in Surrey, Sutcliff spent her childhood in Malta and on various other naval bases where her father was stationed. At a young age, she contracted Still's Disease, which confined her to a wheelchair for most of her life. Shortly before her death, she was named Commander of the British Empire (CBE) one of Britain's most prestigious honors. She died in West Sussex, England, in 1992.
“This novel of early Britain draws you into a desolate landscape that quivers with flame and shadow; an age-old war story of glory...A story dark and fierce and shining.” —Starred boxed review, Booklist