A Day of Pleasure: Stories of a Boy Growing Up in Warsaw (Paperback) 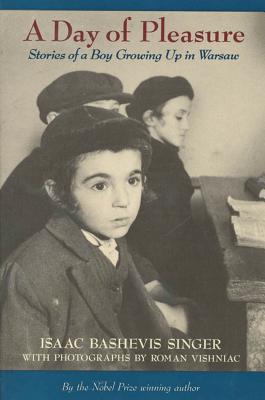 By Isaac Bashevis Singer, Roman Vishniac (Photographs by)
$10.99
NONE IN-STORE but we can probably order it for you

An ALA Notable Book and winner of the National Book Award for Children's Books, Isaac Bashevis Singer's A Day of Pleasure shares his memories as a boy growing up in Warsaw, Poland prior to World War II--featuring striking black and white photographs by Roman Vishniac.

In this series of short stories, the Pulitzer Prize-winning author reveals his childhood as part of Warsaw's Hasidic Jewish community in the early years of the twentieth century, through the First World War and into the 1930s before the Nazi Holocaust destroyed their culture.

From his school days when his parents struggled with poverty in the ghetto through the divide between traditionalists and those determined to modernize their lives to the wars and fascist regimes that made them flee their home, Singer's stories and Vishniac's photographs recreate a world long gone but never forgotten.

Isaac Bashevis Singer (1904-91) was the author of many novels, stories, and children's books. His books include The Slave and Gimpel the Fool and Other Stories. He received the Nobel Prize in Literature in 1978.

“At a time when in children's literature the power of the imagination is frequently lost sight of or diluted, it is fortunate that we can honor a great storyteller. Mr. Singer has created out of remembered fragments of his own childhood a place instantly familiar where life is not neat and orderly, where the adventures of a boy throw into sharp and recognizable focus those resistant elements of the ever-troubled human condition.” —From the judges' citation, National Book Award for Children's Literature

“Singer's memories of his youth in Poland make a powerful, brilliant children's book. The author lays out a panorama of Jewish life in the city-- the rabbis in black velvet and gabardine, the shopkeepers, the street urchins and schoolboys, the poverty, the confusion, the excitement of the prewar time. But even more, the author reveals himself; and the torments and mysteries that plagued him as a child will make his stories fascinating to other children....Reflecting a bygone world, the photographs add a further note of realism and power.” —The Horn Book