Dare to Disappoint: Growing Up in Turkey (Paperback) 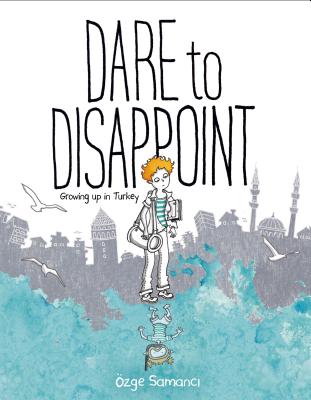 By Ozge Samanci
$17.99
NONE IN-STORE but we can probably order it for you

Growing up on the Aegean Coast, Ozge loved the sea and imagined a life of adventure while her parents and society demanded predictability. Her dad expected Ozge, like her sister, to become an engineer. She tried to hear her own voice over his and the religious and militaristic tensions of Turkey and the conflicts between secularism and fundamentalism. Could she be a scuba diver like Jacques Cousteau? A stage actress? Would it be possible to please everyone including herself?
In her unpredictable and funny graphic memoir, Ozge recounts her story using inventive collages, weaving together images of the sea, politics, science, and friendship.

Ozge Samanci is an artist and an assistant professor. She was born in Izmir, Turkey, and currently lives in Chicago, Illinois

"As she recounts her event-filled, danger-filled childhood, Samanci manages to convey centuries of Turkey’s history as well as the political and cultural upheavals that have marked recent decades there . . . But for all its seriousness, the book never seems heavy . . . among [Samanci's] talents is knowing how to make even a harsh story take flight." - The New York Times Book Review

"A compelling graphic novel . . . at once emotionally fragile and strong, poignant and wry, heartfelt and ultimately optimistic." - Los Angeles Review of Books

"[Samanci is] a gifted cartoonist with an innate sense of pacing and a seemingly inexhaustible well of ideas for presenting information--the book bursts with maps, diagrams, pasted-in leaves, doodles, and ink stamps. It’s remarkably energetic on the page, and combined with Samanci’s appealing, reflective voice, offers a perfectly satisfying memoir reading experience: not just the story of someone’s life, but the chance to see the world through someone else’s eyes." - The Slate Book Review