Curious George Wash Your Hands (CGTV Board book) (Board book) 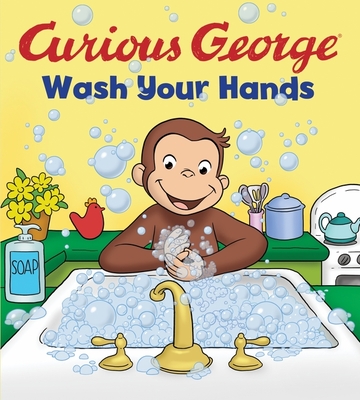 Learn to wash the germs off your hands with Curious George in this playful and informative board book for the youngest readers.

Join George on a playful romp through his day as he learns more about germs and hand-washing. This accessible story features informational text about germs and cleanliness for the youngest readers. This is the perfect primer for little ones just learning to wash their hands.

Hans and Margret Rey created many books during their lives together, including Curious George, one of the most treasured classics of all time, as well as other favorites like Spotty and Pretzel. But it was their rambunctious little monkey who became an instantly recognizable icon. After the Reys escaped Paris by bicycle in 1940 carrying the manuscript for the original Curious George, the book was published in America in 1941. More than 200 Curious George titles followed, with 75 million books sold worldwide. Curious George has been successfully adapted into a major motion picture and an Emmy-winning television show on PBS. www.curiousgeorge.com.

"Bright scenes will have children poring over the pages.... Especially in a post-COVID world, ­washing one’s hands is an important topic and ­Curious George makes it fun."—School Library Journal