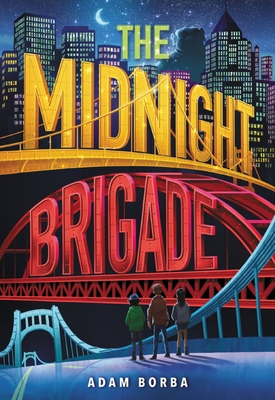 
NONE IN-STORE but we can probably order it for you
Harkening to classics such as Roald Dahl's The BFG, this heartwarming story highlights the power of friendship and the importance of finding your voice.

Carl Chesterfield wishes he could speak up—whether that means being honest with his father about the family's new (and failing) food truck, reaching out to a potential friend, or alerting others to the fact that monsters might be secretly overrunning his hometown of Pittsburgh. There's plenty to fret over. And plenty to question.

When a flyer about a mysterious monster-seeking group called the Midnight Brigade catches his eye, Carl sees an opportunity to find answers. Little does he know, his curiosity will lead him to find an incredible discovery under one of his city's magnificent bridges and to be bolder than he ever imagined. Chock-full of humor and heart, this is the quirky tale of three unexpected friends and the crankiest troll with a heart of gold.
Adam Borba is a writer and film producer from California. The Midnight Brigade is his first novel.
* "Tongue-in-cheek frolic."—Booklist, starred

“Pittsburgh! Monsters! Pierogies! This book has all my favorite things packed into a delightful, mysterious adventure!” —Jonathan Auxier, NYT bestselling author of The Night Gardener

"A delightful, deeply felt, entirely original debut. You'll remember these characters and their stories long after you close the book, and you'll never look at a bridge the same way again. I'll be sending in my application to join the Midnight Brigade right away!"—Jarrett Lerner, creator of the Enginerds series