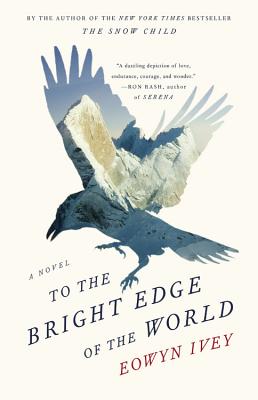 
Email or call for availability
An atmospheric, transporting tale of adventure, love, and survival from the bestselling author of The Snow Child, finalist for the Pulitzer Prize.

In the winter of 1885, decorated war hero Colonel Allen Forrester leads a small band of men on an expedition that has been deemed impossible: to venture up the Wolverine River and pierce the vast, untamed Alaska Territory. Leaving behind Sophie, his newly pregnant wife, Colonel Forrester records his extraordinary experiences in hopes that his journal will reach her if he doesn't return--once he passes beyond the edge of the known world, there's no telling what awaits him.

The Wolverine River Valley is not only breathtaking and forbidding but also terrifying in ways that the colonel and his men never could have imagined. As they map the territory and gather information on the native tribes, whose understanding of the natural world is unlike anything they have ever encountered, Forrester and his men discover the blurred lines between human and wild animal, the living and the dead. And while the men knew they would face starvation and danger, they cannot escape the sense that some greater, mysterious force threatens their lives.

Meanwhile, on her own at Vancouver Barracks, Sophie chafes under the social restrictions and yearns to travel alongside her husband. She does not know that the winter will require as much of her as it does her husband, that both her courage and faith will be tested to the breaking point. Can her exploration of nature through the new art of photography help her to rediscover her sense of beauty and wonder?

The truths that Allen and Sophie discover over the course of that fateful year change both of their lives--and the lives of those who hear their stories long after they're gone--forever.

"An epic adventure story that seems heir to the tradition of Melville's own sweeping and ambitious literary approach to the age-old struggle of humans versus nature . . . An absorbing and high-stakes read." -- Kathleen Rooney, Chicago Tribune
An Amazon Best Book of the Year
A Washington Post Notable Book
A Goodreads Choice Award Nominee
A Library Journal Top 10 Book of the Year
A BookPage Best Book of the Year

Eowyn LeMay Ivey was raised in Alaska and continues to live there with her husband and two daughters. She received her BA in journalism and minor in creative writing through the honors program at Western Washington University, studied creative nonfiction at the University of Alaska Anchorage graduate program, and worked for nearly 10 years as an award-winning reporter at the Frontiersman newspaper. She is the author of the New York Times bestseller The Snow Child.
Praise for TO THE BRIGHT EDGE OF THE WORLD:


"To the Bright Edge of the World moves seamlessly through different times and different voices to depict an often harrowing journey that leads the central characters to question all that they 'have known as real & true.' Ivey's novel is a dazzling depiction of love, endurance, courage, and wonder, and a worthy successor to The Snow Child."
—Ron Rash, author of Serena

"Beautifully told...a page-turner, a fascinating story that is broad in its scope as it is compassionate in its message...Ivey has created a world that is dangerous and beautiful, worrisome and satisfying, all in a novel that readers will not soon forget."
—Jim Carmin, The Miami Herald

"An epic adventure story that seems heir to the tradition of Melville's own sweeping and ambitious literary approach to the age-old struggle of humans versus nature...an absorbing and high-stakes read."
—Kathleen Rooney, The Chicago Tribune

"To the Bright Edge of the World is a glorious feast of American mythology. In it, Eowyn Ivey's Alaska blooms vast and untouchable, bulging with mystery and wonder, and lit by an uneasy midnight sun. On this haunted stage, the lines between man and beast are blurred, and Ivey has etched her most compelling characters: the incorruptible, determined Sophie Forrester, who wrestles with the rules of men and polite society; and her husband, the explorer Allen Forrester, who struggles mightily against the uncivilized Alaskan wilderness with its ragged teeth. Gorgeously written, utterly un-put-downable, To the Bright Edge of the World sweeps its reader to the very brink of known territory, and presents that bright edge in stark relief: gleaming, serrated, unforgiving. As with The Snow Child, Eowyn Ivey has once again written a magical, breathtaking novel that I just cannot put out of my mind."
—Jason Gurley, author of Eleanor

"Eowyn Ivey is a deft craftswoman, attentive to the shape and heft of her sentences...[she] fashions characters who come to warm and vivid life against her frozen Alaskan landscapes...What could be a better beach read than an arctic adventure?"
—Geraldine Brooks, Guardian (US Edition)

"A stunning and intriguing novel combining the epic adventurous sweep of Alaska with minutely beautifully observed details--the reader finishes it wiser and richer."
—Rosamund Lupton, author of Sister and The Quality of Silence

"All the pleasures of a great novel are here--the well-crafted sentence, the deft pacing, the compelling plot, and characters that we care passionately about. Add to those already significant achievements a few eerie hints of the supernatural, some nail-biting mystery/thriller drama, the understanding that's gained from historically accurate details, and the endorphin rush of a love story. And then consider that the novel's construction provides yet another pleasure, the pleasure of the puzzle, as the reader gets to participate in the assemblage of journal entry, letter, drawing, and artifact, therefore co-creating this epic Alaskan adventure. How can one novel contain such richness? Eowyn Ivey is a wonder."
—Tom Franklin, author of Crooked Letter, Crooked Letter

"Ivey deftly draws the reader into the perils of the journey...a compelling historical saga of survival."
—Booklist (Starred Review)

"Ivey not only makes [this novel] work, she makes it work magnificently...The Snow Child (a lovely retelling of an old Russian folk tale), was a runaway hit, an international best seller, and a finalist for the Pulitzer Prize. Her second work is even better."—Library Journal , (Starred Review)

"Ivey's characters, without exception, are skillfully wrought and pull the narrative forward with little effort. She does not stoop to blanket depictions of tribal life or Victorian women, and instead has created a novel with all of the fine details that make historical fiction such an adventure to read. Fans of The Snow Child will not be disappointed."—Meganne Fabrega, Minneapolis Star Tribune

"Lustrous...Ivey's writing is assured and deftly paced. She presents a pleasing chorus of voices and writing styles in an amalgam of journals, letters, newspaper clippings, greeting cards, official reports and more...The couple's moving love story binds the multilayered narrative together...Ivey's first novel, The Snow Child, was a finalist for the Pulitzer Prize, and her follow-up act is certain to garner its own accolades as readers discover its many unfolding pleasures."—David Takami, Seattle Times

"An American masterpiece...beautifully written, fast-paced, wide-ranging, historically-based, and creatively imagined and structured...It delivers in all the ways a great novel should...deserves every accolade it will surely receive."
—Nancy Lord, Alaska Dispatch News

"Ivey's simultaneous wide scope and focus on detail are part of what makes this novel so absorbing. It's no mere testosterone-fueled tale of heroism. Her narrative encompasses, however fleetingly, the girls and women at the margins."
—Laura Collins-Hughes, The Boston Globe

"Read it for the adventure. Read it for the time you'll spend thinking about it long after you've turned the last page."
—Erin Kodicek, Omnivoracious

"Spellbinding...a cracking adventure that pulses with emotional power and a brutal kind of beauty...brings history and folklore to life in a visceral and utterly beguiling way."
—Stephanie Harrison, Bookpage, Top Pick in Fiction for August

"This rich blend of adventure bravado and contemplative memoir, past and present, reinvigorates the idea of a historical novel."
—The National Book Review

"You feel the excitement and the wonder that [the characters] are experiencing. This is another magical novel from her [Ivey]."
—Book Riot

"A terrific example of why we love these stories of man-against-nature. But it also aspires to be something more...it's evident from Ivey's two books that she is also interested in the inexplicable magic of the world--real or imagined--that hovers just beyond our conscious perceptions. And so, while she is certainly deft at conveying the 'gray rivers that roar down from the glaciers, mountains & spruce valleys,' she is equally at home dropping a sea monster into those waters...To the Bright Edge of the World is a moving, surprising story. The Artic Addict in me is very grateful that Ivey wrote it."—Chris Bohjalian, The Washington Post

"An epic adventure intertwined with a story of genuine love."
—Shawna Seed, The Dallas Morning News

"Beautifully done...you'll get lost in the details and become engrossed in the love story playing out...Simply wonderful, and I cannot recommend it enough."
—Amy Gwiazdowski, BookReporter

"It's safe to say that Ivey fans will not be disappointed by this spine-tingling romantic odyssey."
—David Fox, Anchorage Press