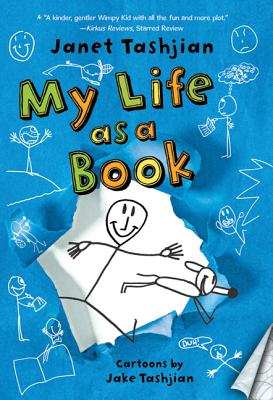 This is book number 1 in the The My Life series series.

Summer's finally here, and Derek Fallon is looking forward to pelting the UPS truck with water balloons, climbing onto the garage roof, and conducting silly investigations. But when his parents decide to send him to Learning Camp, Derek's dreams of fun come to an end. Ever since he's been labeled a "reluctant reader," his mom has pushed him to read "real" books-something other than his beloved Calvin & Hobbes.
As Derek forges unexpected friendships and uncovers a family secret involving himself (in diapers! no less), he realizes that adventures and surprises are around the corner, complete with curve balls. My Life as a Book is a 2011 Bank Street - Best Children's Book of the Year.

Janet Tashjian is a middle-grade and young adult novelist who’s been writing books for children for over two decades. Her first novel Tru Confessions was made into a critically acclaimed Disney TV movie starring Clara Bryant and Shia LaBeouf. The Gospel According to Larry series is a cult favorite and Fault Line is taught in many middle and high schools. Her bestselling My Life As a Book series is illustrated by her son, Jake. They also collaborated on the Einstein the Class Hamster series.

Janet collaborated with fellow Macmillan author Laurie Keller on the chapter book series Marty Frye, Private Eye. Janet currently lives in Los Angeles and made her new home city the setting of the Sticker Girl series, which details the adventures of Martina who overcomes being shy with the help of her magical stickers that come to life.

Jake Tashjian is the illustrator for the My Life As a...series, including My Life As a Ninja and My Life As a YouTuber. Jake also created and illustrated the Einstein the Class Hamster series. He collaborates on his novels with his mother, author Janet Tashjian. He has also illustrated several books for the author P.T. Evans.

Fun fact: Jake is a visual learner. When Jake was in elementary school, he used to draw his vocabulary words on index cards. This later became the inspiration for the main character, Derek, in the My Life As series.

In 2016 Jake co-founded Workshop 2.0, a non-profit foundation to train and hire other young artists on the Autism Spectrum.

Jake grew up in Massachusetts and currently lives in Los Angeles. He is an avid surfer and filmmaker.

“[The] illustrations, drawn by Tashjian's 14-year-old son, Jake, are quite clever.” —Publishers Weekly


“This book is visually appealing to reluctant readers and shows that all kinds of stories can surprise us.” —Chicago Tribune

“A kinder, gentler Wimpy Kid with all the fun and more plot.” —Kirkus Reviews, starred review

“Janet Tashjian, known for her young adult books, offers a novel that's part Diary of a Wimpy Kid (2007), part intriguing mystery; yet the best element here is really the first-person voice, which captures so completely the pushes and pulls in the life of someone with learning disabilities. . . . Give this to kids who think they don't like reading. It might change their minds.” —Booklist, starred review

“Sure to engage fans of Jeff Kinney's Diary of a Wimpy Kid books (Abrams) as well as those looking for a spunky, contemporary boy with a mystery to solve.” —School Library Journal

“My Life as a Book is a fabulous, fast-paced choice for reluctant and avid readers alike.” —BookPage

“Cartoon drawings by the author's teenaged son decorate the margins and not only re-create Derek's illustrated vocabulary lists but also reduce the amount of text on each page, making the book more approachable for kids like Derek. Derek tells readers, ‘If my life were a book, I'd have my own cool adventures.' It is, and he does.” —The Horn Book