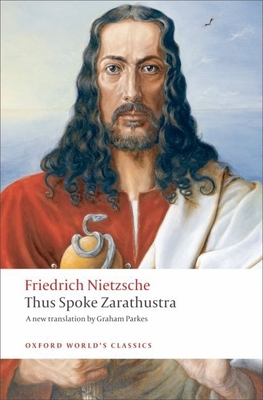 By Friedrich Wilhelm Nietzsche, Graham Parkes (Translator)
$14.95
Not currently in the store BUT we can probably order it for you

hus Spake Zarathustra is a masterpiece of literature as well as philosophy. It was Nietzsche's own favorite and has proved to be his most popular. In this book he addresses the problem of how to live a fulfilling life in a world without meaning, in the aftermath of "the death of God." His solution lies in the idea of eternal recurrence, which he calls "the highest formula of affirmation that can ever be attained." A successful engagement with this profoundly Dionysian idea enables us to choose clearly among the myriad possibilities that existence offers, and thereby to affirm every moment of our lives with others on this "sacred" earth.
Grahm Parkes's new translation is more accurate than previous versions, and is the first to retain the musicality of the original, by paying attention to the rhythms and cadences of the German. His introduction examines the work's three most important philosophical ideas and for the first time annotates the abundance of allusions to the Bible and other classic texts with which Nietzsche's masterpiece is in conversation. About the Series: For over 100 years Oxford World's Classics has made available the broadest spectrum of literature from around the globe. Each affordable volume reflects Oxford's commitment to scholarship, providing the most accurate text plus a wealth of other valuable features, including expert introductions by leading authorities, voluminous notes to clarify the text, up-to-date bibliographies for further study, and much more.