Rebel of the Sands (Paperback) 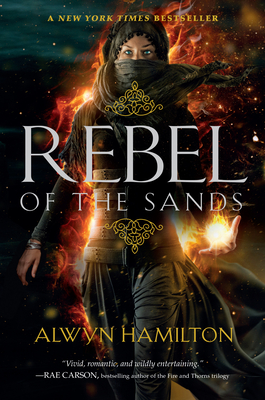 Rebel of the Sands (Paperback)


NONE IN-STORE but we can probably order it for you
The New York Times bestselling novel by the Goodreads Choice Awards Best Debut Author of 2016, published in 15 countries!

Mortals rule the desert nation of Miraji, but mythical beasts still roam the wild and remote areas, and rumor has it that somewhere, djinn still perform their magic.  For humans, it’s an unforgiving place, especially if you’re poor, orphaned, or female.

Amani Al’Hiza is all three.  She’s a gifted gunslinger with perfect aim, but she can’t shoot her way out of Dustwalk, the back-country town where she’s destined to wind up wed or dead. Then she meets Jin, a rakish foreigner, in a shooting contest, and sees him as the perfect escape route. But though she’s spent years dreaming of leaving Dustwalk, she never imagined she’d gallop away on mythical horse—or that it would take a foreign fugitive to show her the heart of the desert she thought she knew.

“Fans of Sarah Maas and Victoria Aveyard should give this one a try.” —VOYA
Alwyn Hamilton was born in Toronto and spent her childhood bouncing between Europe and Canada until her parents settled in France. She grew up in a small town there, which might have compelled her to burst randomly into the opening song from Beauty and the Beast were it not for her total tone-deafness. She instead attempted to read and write her way to new places and developed a weakness for fantasy and cross-dressing heroines. She left France for Cambridge University to study history of art at King’s College, and then to London, where she became indentured to an auction house. She has a bad habit of acquiring more hardcovers than is smart for someone who moves quite so often. Follow her @AlwynFJH.
Raves for REBEL OF THE SANDS:

* “This atmospheric fantasy combines magic, mythology, and the Wild West to create a riveting tale...an exciting, romantic adventure that is unique and all its own.”—Booklist, starred review

* “If the best of the Old West and the coolest parts of Arabian Nights had a baby who then rebelled by going steampunk, the result would be this gem of a book.”—BCCB, starred review

* “Readers will be drawn into the story and won’t want to put this book down.”—School Library Connections, starred review

“Rebel of the Sands is a winning bit of storytelling, as well as homage to storytelling itself. It evokes such disparate influences – 1,001 Arabian Nights, Hindu lore, and Navajo myth, as well as, inevitably, the triumvirate of Tolkien, Lucas and Rowling – that at times you wonder whether Hamilton can pull it all off. She can. She has circled a spot on the map and claimed it for her own.” —The New York Times Book Review

“Debut author Hamilton combines elements of Western and Middle Eastern civilization and lore with her own mythology, crafting an enticing, full-bodied story . . .  successfully mingles romance with thrilling stakes, and hints at a welcome sequel.”—Publishers Weekly

“A perfect combination of American Westerns and Arabian myths . . . Fans of Sarah Maas and Victoria Aveyard should give this one a try.” —VOYA

“Rebel of the Sands is vivid, romantic, and wildly entertaining. You will cheer for Amani the whole way as she escapes the bonds of oppression and finds her own power, and you will mark your calendar for the sequel.”—Rae Carson, bestselling author of the Fire & Thorns trilogy

“Buckle up for a wild ride! Rebel of the Sands is a stunning debut full of irresistible energy, heart-stopping action, and a new voice that sings.”—Alison Goodman, New York Times bestselling author of Eon and Eona