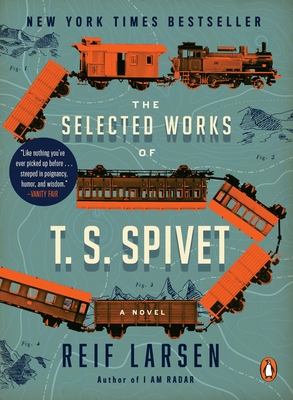 By Reif Larsen
$21.06
Not currently in the store BUT we can probably order it for you

“T.S. Spivet, 12-year-old boy genius and cartographer, is a fresh character who will share the wonders of seeing the world through adolescent eyes like no other, making sense of the world by mapping, charting and illustrating everywhere he goes. When the Smithsonian Institution, unaware of his age, offers T.S. a prestigious award, he decides to hop on a train which takes him on a journey from his ranch in Montana to the capital. Reif Larsen has a remarkably original and touching achievement in this first novel. Beautiful maps and illustrations will delight and amaze readers. Truly a must-read!”
— Jeanne Costello, Maria's Bookshop, Durango, CO

“In The Selected Works of T.S. Spivet, which is full of observations and maps, we see the world through the eyes of a Cheerios-obsessed 12-year-old with the wisdom of an old soul. This book is funny, tender, heartwarming, heartbreaking, and full of insight. On every page there was something that I wanted to read aloud to anyone who would listen.”
— Jake Hallman, A Great Good Place for Books, Oakland, CA

T.S. sets out alone, leaving before dawn with a plan to hop a freight train and hobo east. Once aboard, his adventures step into high gear and he meticulously maps, charts, and illustrates his exploits, documenting mythical wormholes in the Midwest, the urban phenomenon of "rims," and the pleasures of McDonald's, among other things. We come to see the world through T.S.'s eyes and in his thorough investigation of the outside world he also reveals himself.

As he travels away from the ranch and his family we learn how the journey also brings him closer to home. A secret family history found within his luggage tells the story of T.S.'s ancestors and their long-ago passage west, offering profound insight into the family he left behind and his role within it. As T.S. reads he discovers the sometimes shadowy boundary between fact and fiction and realizes that, for all his analytical rigor, the world around him is a mystery.

All that he has learned is tested when he arrives at the capital to claim his prize and is welcomed into science's inner circle. For all its shine, fame seems more highly valued than ideas in this new world and friends are hard to find.

T.S.'s trip begins at the Copper Top Ranch and the last known place he stands is Washington, D.C., but his journey's movement is far harder to track: How do you map the delicate lessons learned about family and self? How do you depict how it feels to first venture out on your own? Is there a definitive way to communicate the ebbs and tides of heartbreak, loss, loneliness, love? These are the questions that strike at the core of this very special debut.

“[The Selected Works of T.S. Spivet] is like nothing you’ve ever picked up…Illustrated with witty marginalia (supposedly produced by its protagonist), it is also steeped in poignancy, humor, and wisdom.” —Vanity Fair

“As much a work of art as it is a warm, compelling story of family ties, science and the importance of understanding the world—and the human heart.” —The Miami Herald

“A mightily impressive debut, a wistful glimpse at that moment when adulthood threatens those
last, vital days of youth.” —Entertainment Weekly

“[A] beautiful book. Each page is literally a work of art….” —Boston Globe

“[A]n ambitious and smart first novel ….This is a book to be read slowly, savored for its digressions and offbeat characters.” —Newsday

“Spivet’s narration is undeniably funny; not since Jonathan Safran Foer’s Extremely Loud & Incredibly Close has a precocious young boy carried a novel so ably.” —The Stranger

“Inventing a preternaturally bright child is always tricky, but Larsen imbues T. S. with his own creditable identity, making him every bit as doubting and overwhelmed as he is precocious and indomitable—he’s a little bundle of paradoxes, with the proper literary DNA of any well-formed character. On top of that, he’s a right laugh, which never hurts.” —Book Forum

“The novel is a cabinet of wonders, an odyssey of self-discovery, a family romance, a symphony of topography, geology and American history. The book hardly seems able to stay between its covers, bulging as it is with so many astonishments, so many crossings of fictional lines.”
—Bookpage

“Reif Larsen has kicked off his literary career with a stunning and beautiful book….Larsen managed to write one of the most highly original novels of the year.” —Bookslut

“Two predictions about The Selected Works of T.S. Spivet: readers are going to love it as much as I did, and few if any will have experienced anything like it. I'm flabbergasted by Reif Larsen's talent, and I was warmed by his generosity. Here is a book that does the impossible: it combines Mark Twain, Thomas Pynchon, and Little Miss Sunshine. Good novels entertain; great ones come as a gift to the readers who are lucky enough to find them. This book is a treasure.”—Stephen King