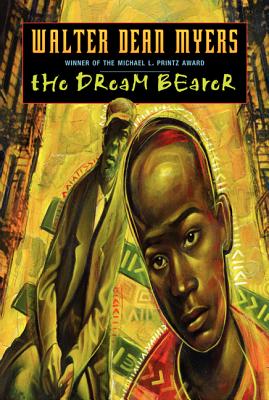 Printz Award winner Walter Dean Myers deftly draws a compassionate portrait of a boy's odyssey of self-discovery and the acceptance and empathy for others he learns along the way.

Then David meets Mr. Moses, a mysterious man who tells him that dreams might be the only things we have that are real. And it is Mr. Moses' gift of dreams that gives David a new way to see inside his father's heart.

I wonder what kind of dreams Reuben has. When I thought about him dreaming, I thought of him having a storm in his head, with lightning and far-off thunder and the wind blowing big raindrops and a bigger storm coming just down the street, just around the corner, like a monster waiting for you. I thought Reuben dreamed of monsters that scared him.

They scared me too.

Walter Dean Myers was the New York Times bestselling author of Monster, the winner of the first Michael L. Printz Award; a former National Ambassador for Young People's Literature; and an inaugural NYC Literary Honoree. Myers received every single major award in the field of children's literature. He was the author of two Newbery Honor Books and six Coretta Scott King Awardees. He was the recipient of the Margaret A. Edwards Award for lifetime achievement in writing for young adults, a three-time National Book Award Finalist, as well as the first-ever recipient of the Coretta Scott King-Virginia Hamilton Award for Lifetime Achievement.

“Throughout his nuanced examination of this unhappy family, Myers retains his usual gentle, plainspoken accessibility, making this a thoughtful book that will reach many young readers." — Bulletin of the Center for Children’s Books

“David and his world come alive for the reader in deceptively simple yet poignant prose.” — KLIATT