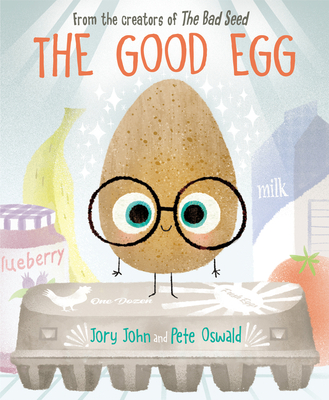 An Amazon Best Books of the Year 2019 selection!

From the bestselling creators of The Bad Seed, a timely story about not having to be Grade A perfect!

But trying to be so good is hard when everyone else is plain ol’ rotten.

As the other eggs in the dozen behave badly, the good egg starts to crack from all the pressure of feeling like he has to be perfect.

So, he decides enough is enough! It’s time for him to make a change…

Dynamic duo Jory John and Pete Oswald hatch a funny and charming story that reminds us of the importance of balance, self-care, and accepting those we love (even if they are sometimes a bit rotten).

Jory John is a New York Times bestselling author and two-time E. B. White Read Aloud Honor recipient. Jory’s work includes the award-winning Goodnight Already! series; the bestselling Terrible Two series; the popular picture books The Bad Seed, Penguin Problems, and Quit Calling Me a Monster!; and the national bestseller All My Friends Are Dead, among other books. He lives in Oregon. You can visit him online at www.joryjohn.com.

Pete Oswald is an LA-based artist, kid lit author/illustrator, and production designer. He is the co-creator of Mingo the Flamingo, published in 2017 by HarperCollins. Pete is also the illustrator of The Bad Seed, by Jory John. When Pete is not working on books he is helping to uplift many of the most successful animated franchises as a character designer, concept artist, and production designer. Pete lives in Santa Monica, California, with his wife and two sons.

“Both text and art complement each other perfectly.” — Kirkus Reviews (starred review)

“John embeds a seed of a great idea—finding a balance between personal and social responsibility—within a rip-roaring, touching narrative.” — Kirkus Reviews (starred review)

“An enormously entertaining lesson about the perils of perfectionism.” — Booklist (starred review)

“...an organic and locally sourced tale of the importance of self-care.” — School Library Journal

“The illustrations are an egg-cellent source of amusement...” — School Library Journal

“Perfect for storytime and one-on-one sharing, hand this to readers seeking comic silliness with a deeper message of self-reflection and kindness.” — School Library Journal

“The team behind The Bad Seed presents another humorous picture book about staying true to oneself.” — The Horn Book

“[T]he simple lessons in John’s lightand-breezy text may be useful regarding everyday encounters.” — The Horn Book

“Oswald’s textured watercolor and digital illustrations show a guileless, bright-eyed, glasses-wearing, oval-shaped character with a brown speckled shell and spindly little limbs—an egghead personified, and one for whom readers will cheer.” — The Horn Book