The Dangerous Art of Blending In (Paperback) 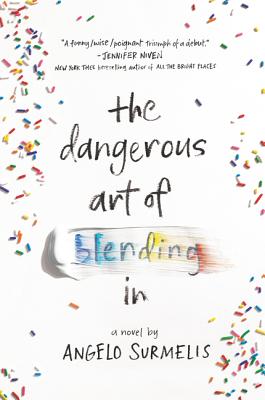 By Angelo Surmelis
$9.99
NONE IN-STORE but we can probably order it for you

A raw, powerful, but ultimately uplifting debut novel perfect for fans of Aristotle and Dante Discover the Secrets of the Universe from debut author Angelo Surmelis.

Seventeen-year-old Evan Panos doesn’t know where he fits in. His strict immigrant Greek mother refuses to see him as anything but a disappointment. His quiet, workaholic father is a staunch believer in avoiding any kind of conflict. And his best friend, Henry, has somehow become distractingly attractive over the summer.

Tired, isolated, scared—Evan finds that his only escape is to draw in an abandoned monastery that feels as lonely as he is. And yes, he kissed one guy over the summer. But it’s Henry who’s now proving to be irresistible. Henry, who suddenly seems interested in being more than friends. And it’s Henry who makes him believe that he deserves more than his mother’s harsh words and terrifying abuse.

But as things with Henry heat up, and his mother’s abuse escalates, Evan has to decide how to find his voice in a world where he has survived so long by being silent.

This is a powerful and revelatory coming-of-age novel based on the author’s own childhood, about a boy who learns to step into his light.

Angelo Surmelis was raised in Greece until he immigrated to Illinois at the age of five. He currently lives in Los Angeles. An award-winning designer, Surmelis has been featured on over fifty television shows, including the Today show and Extra, as well as in magazines such as InStyle, TV Guide, and Entertainment Weekly. He has worked as a host on networks like HGTV and TLC. He can be found online at www.angelohome.com.

“At once timely and timeless. A funny/wise/poignant triumph of a debut.”
— Jennifer Niven, New York Times bestselling author of All the Bright Places

“Your heart will break and beat for Evan Panos. This is a soaring and courageous debut, unafraid to tackle the weighty subjects of faith and love.”
— Jeff Zentner, award-winning author of The Serpent King

“This is a story of survival and of triumphing to become one’s authentic self. An important book that will serve as a lighthouse for gay teenagers and build empathy in all readers, no matter their backgrounds.”
— Jennifer Mathieu, author of Moxie and The Truth About Alice

“Angelo Surmelis writes with unflinching honesty, wisdom, and heartbreaking grace about the struggle for self when family is one of your greatest obstacles.”
— Kerry Kletter, author of The First Time She Drowned

“Readers will yearn for Evan to achieve the freedom, happiness, and love he deeply desires.”
— Publishers Weekly

“Another heartbreaking novel that pits religion and sexuality against each other, but with an important, culturally specific perspective.”
— Kirkus Reviews