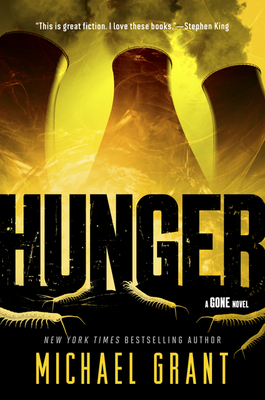 This is book number 2 in the Gone series.

The second book in Michael Grant's New York Times bestselling Gone series, Hunger is a thrilling, action-packed story that is impossible to put down.

It's been three months since all the adults disappeared. Gone. Food ran out weeks ago and starvation is imminent. Meanwhile, the normal teens have grown resentful of the kids with powers. And when an unthinkable tragedy occurs, chaos descends upon the town. There is no longer right and wrong. Each kid is out for himself and even the good ones turn murderous. But a larger problem looms. The Darkness, a sinister creature that has lived buried deep in the hills, begins calling to some of the teens in the FAYZ. Calling to them, guiding them, manipulating them.

The Darkness has awakened. And it is hungry.

“Readers will be unable to avoid involuntarily gasping, shuddering, or flinching while reading this suspense-filled story.” —Voice of Youth Advocates (VOYA) (starred review)

“Readers will be unable to avoid involuntarily gasping, shuddering, or flinching while reading this suspense-filled story.” — Voice of Youth Advocates (VOYA) (starred review)

“Like Gone, this novel is not for the faint of heart or weak of stomach. Nonstop action.” — School Library Journal