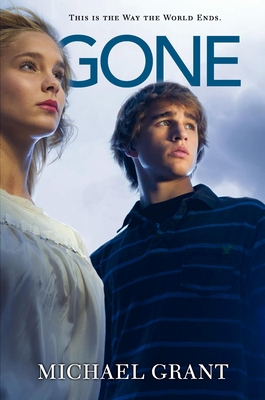 This is book number 1 in the Gone series.

The first in New York Times bestselling author Michael Grant's breathtaking dystopian sci-fi saga, Gone is a page-turning thriller that invokes the classic The Lord of the Flies along with the horror of Stephen King.

In the blink of an eye, everyone disappears. Gone. Except for the young. There are teens, but not one single adult. Just as suddenly, there are no phones, no internet, no television. No way to get help. And no way to figure out what's happened.

It's a terrifying new world. Sides are being chosen, a fight is shaping up. Townies against rich kids. Bullies against the weak. Powerful against powerless. And time is running out: on your birthday, you disappear just like everyone else. . . .

“A potent mix of action and thoughtfulness—centered around good and evil, courage and cowardice—renders this a tour de force that will leave readers dazed, disturbed, and utterly breathless.” —ALA Booklist (starred review)

“Extraordinarily skillful pacing, which leaves the reader constantly on the verge of a new discovery.”
— KLIATT

“If Stephen King had written Lord of the Flies, it might have been a little like this novel.”
— Voice of Youth Advocates (VOYA) (starred review)