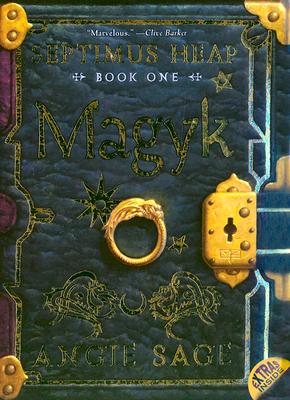 By Angie Sage, Mark Zug (Illustrator)
$7.99
On Our Shelves Now

This is book number 1 in the Septimus Heap series.

The first book in the internationally bestselling Septimus Heap series by Angie Sage, featuring the funny and fantastic adventures of a wizard apprentice and his quest to become an ExtraOrdinary Wizard.

Septimus Heap, the seventh son of the seventh son, disappears the night he is born, pronounced dead by the midwife. That same night, the baby's father, Silas Heap, comes across an abandoned child in the snow—a newborn girl with violet eyes. Who is this mysterious baby girl, and what really happened to the Heaps' beloved son Septimus?

The first book in this enthralling series by Angie Sage leads readers on a fantastic journey filled with quirky characters and Magykal charms, potions, and spells. Magyk is the original story of lost and rediscovered identities, rich with humor and heart.

ANGIE SAGE was born in London and grew up in the Thames Valley, London, and Kent. She loves the sea, spooky old houses, and time traveling (the easy way, by reading history books). Angie has created many books for children, including the New York Times bestselling series Septimus Heap and Araminta Spookie. She lives in England. Visit her online at www.angiesage.com and on Twitter @AngieSageAuthor.

Mark Zug has illustrated many collectible card games, including Magic: The Gathering and Dune, as well as books and magazines. He lives in Pennsylvania.

“This first book in the Septimus Heap series is a cheerful, clever offering.”
— Bulletin of the Center for Children’s Books

“A fresh take on the world of magic.”
— Child Magazine