1000 Copies of "To The Bright Edge of the World" Sold at Fireside Books! 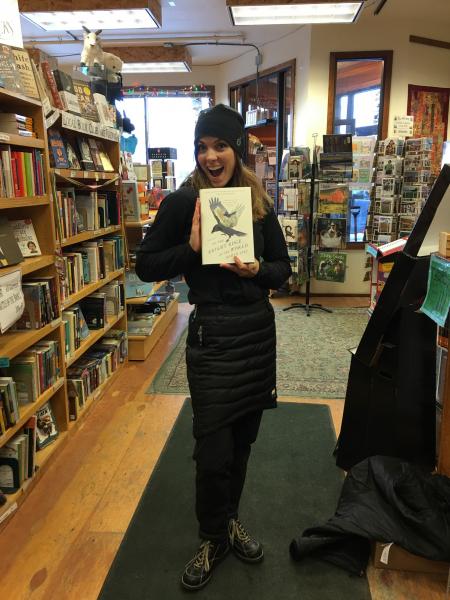 Eowyn Ivey's second novel. The novel -- a dual story of exploration -- on the frontiers of photography and in the wilds of Alaska -- has been a mainstay of Palmer conversation since it was released.last August.

Eowyn Ivey was shortlisted for the Pulitzer Prize for her first novel, The Snow Child. A reviewer in Library Journal says that Eowyn's second novel "is even better."

To the Bright Edge of the World has received critical acclaim from many other world-renowned writers.

Ron Rash, the author of Serena and many other books says “To the Bright Edge of the World moves seamlessly through different times and different voices to depict an often harrowing journey that leads the central characters to question all that they ‘have known as real & true.’ Ivey’s novel is a dazzling depiction of love, endurance, courage, and wonder, and a worthy successor to The Snow Child.”

Tom Franklin, author of Crooked Letter, Crooked Letter says, "All the pleasures of a great novel are here–the well-crafted sentence, the deft pacing, the compelling plot, and characters that we care passionately about."

Before becoming a world-renowned author, Eowyn Ivey worked for the Frontiersman newspaper and for Fireside Books. To the Bright Edge of the World also includes a map and illustrations created by our very own Ruth Hulbert

In the winter of 1885, Lieutenant Colonel Allen Forrester sets out with his men on an expedition into the newly acquired territory of Alaska. Their objective: travel up the ferocious Wolverine River, mapping the interior and gathering information on the region's potentially dangerous native tribes. With a young and newly pregnant wife at home, Forrester is anxious to complete the journey with all possible speed and return to her. But once the crew passes beyond the edge of the known world, there's no telling what awaits them.

The Snow Child: A Novel (Paperback)

Alaska, 1920: a brutal place to homestead, and especially tough for recent arrivals Jack and Mabel. Childless, they are drifting apart--he breaking under the weight of the work of the farm; she crumbling from loneliness and despair. In a moment of levity during the season's first snowfall, they build a child out of snow. The next morning the snow child is gone--but they glimpse a young, blonde-haired girl running through the trees...